PHILADELPHIA - A "Stop the Violence" rally was held Friday in memory of murdered Simon Gratz graduate and athlete Ross Carter.

“This gun violence is affecting this whole entire city but today we are here for a player a star in our community was taken so abruptly,” said Simon Gratz Head Coach Lynard Stewart.

He stood before a crowd gathered outside the school for a stop the violence rally in memory of one of his former players.

“It’s important to represent for him today and we’re doing it in his honor,” said Stewart.

Ross Carter, 19, was shot to death last month in Nicetown. He had just graduated from Simon Gratz in the spring where he was a star athlete.

“We had a spectacular lit year last year and we wouldn’t be able to have that season that year we had without him,” said Stewart. 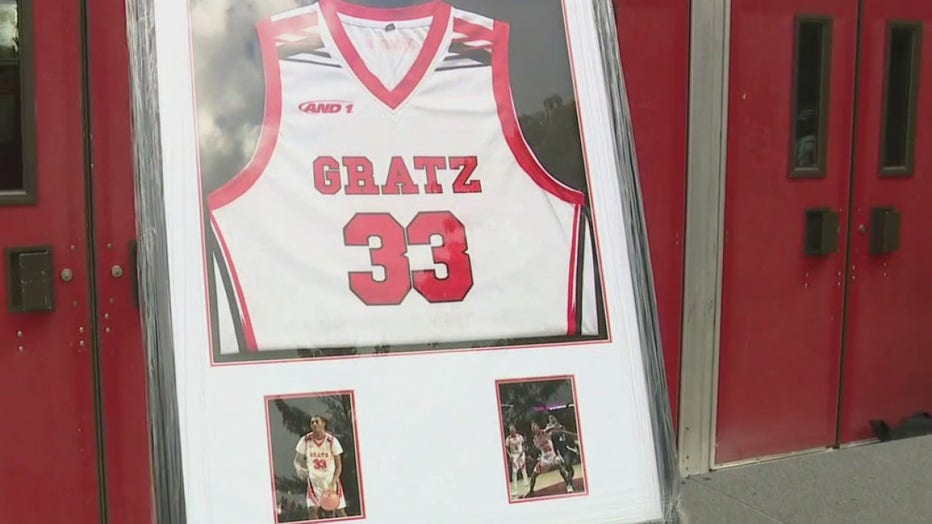 During the rally Ross’s mom, Ebony, and other family received his jersey. It’s the one he wore in the championship game this year.

Former NBA player Rasheed Wallace who is also a graduate of Simon Gratz hosted the rally. Wallace says he returned to his hometown because he wants to be part of change with the youth in the city.

"It's my city so now I'm trying to do something about it, just trying to reach back to these young fellas out here and these young sistas out here like look let's put these guns down," said Wallace.

Tahira Fortune knows the pain of losing a child to gun violence.

Someone shot her son Samir to death in February of 2017.

He was 18 years old and just months away from graduating high school.

“I'm still fighting for justice. I’m hoping that Philadelphia can do something about the gun violence and the gun laws. Something needs to change because I’m tired of mothers burying their children,” said Fortune.

Several organizations spoke during the rally about the violence, addressing trauma and resources available to the community in hopes that happened to Ross Carter won't happen to another young person.

“I’m still very much in shock that he’s gone,” said Stewart. Ross Carter’s family is still waiting for justice. They say no arrest or motive yet in his murder.