NEW YORK - Wilson Cruz, a co-star in the new Hulu animated children's series "The Bravest Knight," describes the show's dad couple this way: "We're not explaining homosexuality, or same-gender sexuality. We're talking about the love of a family."

His words and those of his fellow Hulu father, T.R. Knight, speak loudly about the state of LGBTQ representation in TV fare for kids, a segment of media that has been broadening story lines over the last several years to include a range of non-binary characters.

"It's these parents that love her and care about her. That's it," Knight told The Associated Press in a recent joint interview with Cruz, referring to their cartoon daughter, Nia, a brave knight-in-training.

Seeing same-sex parents, gay marriage and general expressions of romantic non-binary affection is something the 46-year-old Knight wishes he had been exposed to growing up in Minneapolis.

"You feel starved, and you feel lonely, and that depression and that loneliness, it ain't healthy," he said.

RELATED: Same-sex couple featured on 'My Little Pony' for first time ‘Arthur' character comes out as gay, gets married in season 22 premiere 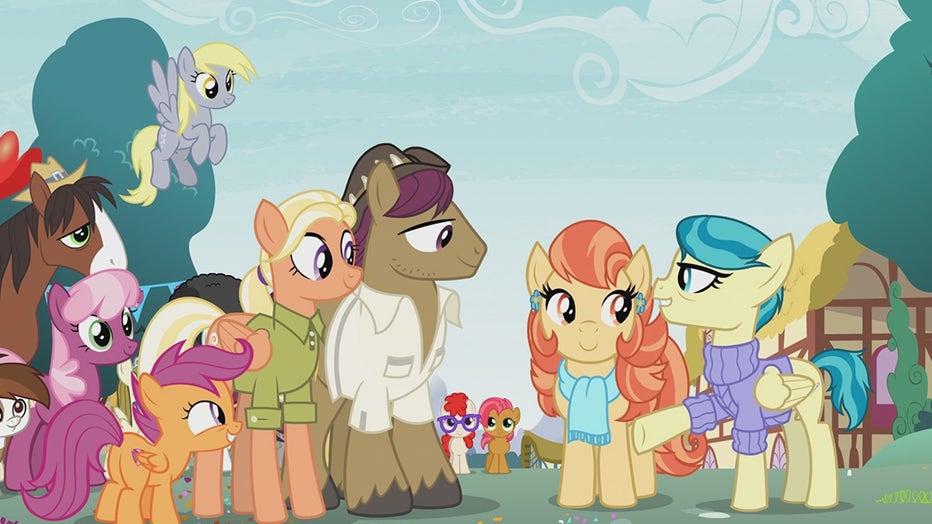 Coinciding with Pride Month, the Discovery Family cartoon series "My Little Pony" introduced a same-sex couple on the show for the first time.

Based on a 2014 book by Daniel Errico, the show comes soon after the long-running "Arthur" series on PBS featured a same-sex wedding for the first time, facing a ban in Alabama in the process. In June, the Hasbro-created "My Little Pony" series on Disney showed its first lesbian couple, Aunt Holiday and Auntie Lofty, who care for a young pony named Scootaloo.

"We have featured many types of families in the show over the past nine seasons and we hope this helps to provide kids and fans from all backgrounds an opportunity to identify with our characters and learn from their stories," said a Hasbro spokeswoman, Julie Duffy. 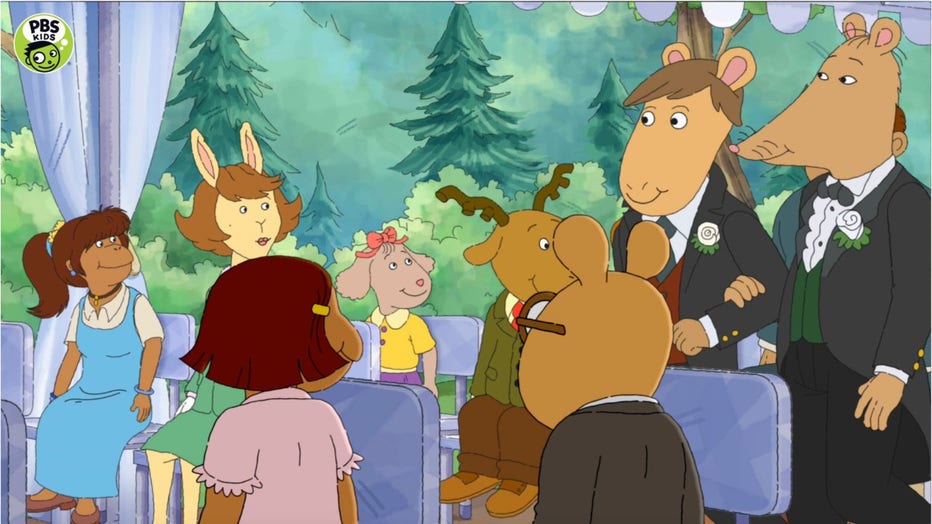 Zeke Stokes, chief programs officer for the media monitoring nonprofit GLAAD, said the struggle for inclusion has become easier as a number of LGBTQ writers and producers have made their way into positions of influence, though they're still a fraction overall.

"What we've said to them all along is that we will lock arms with you and we will make sure that you hear from the families who are being impacted by this in a positive way," Stokes said of GLAAD's work behind the scenes to support greater representation. "Not only have they heard from LGBTQ families but they've heard from other families who are like, yeah, my kid has a friend who's LGBTQ or my friend goes over to his friend's house and their parents are LGBTQ. This is not just something that impacts LGBTQ families. It's really something that gets experienced by everyone in society."

Sometimes, he said, GLAAD is called on to review LGBTQ content before it airs. It happened on "Andi Mack," a live-action, coming-of-age tween series that premiered on the Disney Channel in 2017, when a gay character, Cyrus, was coming out. The comedy-drama won GLAAD's inaugural media award for outstanding kids and family programming last year but was canceled after three seasons.

This year's GLAAD winner was one of the animated groundbreakers, "Steven Universe," which has also earned a Peabody Award and has fans of all ages since it premiered on the Cartoon Network in 2013. The show features the world of the Crystal Gems, magical human-like aliens who live with young Steven, a half-human, half-Gem boy who turns into the intersex "Stevonnie" after dancing close with a girl and "fusing," a skill driven by affection.

A kiss between two of the three female-presenting Gems with whom Steven lives, Ruby and Sapphire, prompted a halfhearted online petition four years ago demanding the show pull back from LGBTQ themes. It didn't.

Fallout in 2005 for the "Arthur" spin-off "Postcards from Buster" was a bigger deal. Then-U.S. Education Secretary Margaret Spellings demanded that PBS return federal funding over the inclusion in one episode of lesbian parents. PBS decided not to air the episode, "Sugartime!" The show's co-producer, WGBH in Boston, distributed the episode directly to public television stations after the PBS decision. Some, including WGBH, aired it.

"It was a huge national scandal. It was early in my career and that incident really scarred us, those of us who are gay content creators," said Chris Nee, who was the showrunner for Disney Junior's Peabody-winning preschool hit "Doc McStuffins."

"There was this idea that this was something you really couldn't broach. The younger generation of content creators are not only bolder to begin with but also don't remember all of that stuff," she said.

Her "Doc McStuffins" aired an episode in 2017, "The Emergency Plan," that featured a biracial, two-mom household, voiced by Wanda Sykes and Portia de Rossi. Today, the Emmy-winning Nee said, airing LGBTQ content for children is still fraught for some.

"I know that there really is backlash for each of the companies and so they tiptoe," she said. "Big broadcasters are not always our bravest souls. But a lot of companies are working very hard to change what's out there."

Streaming has helped, notably Amazon Prime and Netflix, where Nee has a multiyear deal after leaving Disney. Among those without specific LGBTQ cast members or characters is the PBS mainstay "Sesame Street," known for embracing a wide range of diversity over its 50-year history. The show referenced two dads as far back as 1982, in a song, and two moms in a more recent segment about families, among other examples.

Non-binary actress Asia Kate Dillon, who plays Taylor Mason on Showtime's "Billions," said they would have benefited from the exposure as a kid growing up in Ithaca, New York. At 34, they also voice Val/entina, a gender fluid former Russian agent, on the animated web series "gen:LOCK."

"It would have been life-changing in many ways," they said. "It's one of the reasons I feel really proud and also humbled to be playing Taylor on 'Billions' and also The Adjudicator in 'John Wick 3.' These are non-binary characters who are getting wide visibility and who are integral characters in the stories that they're a part of. ... I get messages from people of all ages all over the world who say they feel less alone."

Shadi Petosky, who is trans, was co-creator and showrunner of the short-lived 2017 "Danger & Eggs" animated series on Amazon Prime. The series was known for its LGBTQ representation on air and off. There was a lesbian folk duo, gay dads, a young trans girl, Zadie, voiced by teen trans activist Jazz Jennings, and a non-binary character named Milo, who was voiced by agender activist and model Tyler Ford. The show's finale was set during a Pride festival.

It was well received, yet "Danger & Eggs" never had a second season despite winning an Emmy for direction. Petosky, who was not at liberty to discuss the reason, has since moved to Netflix, where she executive produces the new animated show "Twelve Forever," about a girl who doesn't want to grow up and creates a fantasy world where she doesn't have to.

"The main character is queer and coming to terms with her sexuality," Petosky said. "That's still a big deal. I want to see a lot more about what it's like for us as kids. Representation still falls way short of reality."