Springdale Police said in a Facebook post more information would be released at a later time, but didn't provide details on the incident.

SPRINGDALE, Utah - A man who is suspected of shooting at vehicles and leading police officers on a chase near Zion National Park in southern Utah was taken into police custody on Wednesday night, authorities said.

It wasn't clear if any injuries have been reported. Zion National Park spokeswoman Amanda Rowland said the suspect had been apprehended, but she declined to say if anyone had been injured.

Officers first responded at about 3:40 p.m. local time on Wednesday to a report of a man who brandished a handgun during an argument in the city of Hurricane, about 20 miles southwest of the national park. He then drove off in a silver-colored pickup truck, according to a statement from the Washington County Critical Incident Task Force.

Officers attempted a traffic stop but the suspect continued along State Route 9 and shot at multiple vehicles, authorities said. Both directions of the roadway were temporarily closed for a period of time through Rockville, according to the Utah Department of Transportation.

Residents of Rockville, which has about 220 residents, were told to take shelter at 4:30 p.m. in response to gunfire on the highway. 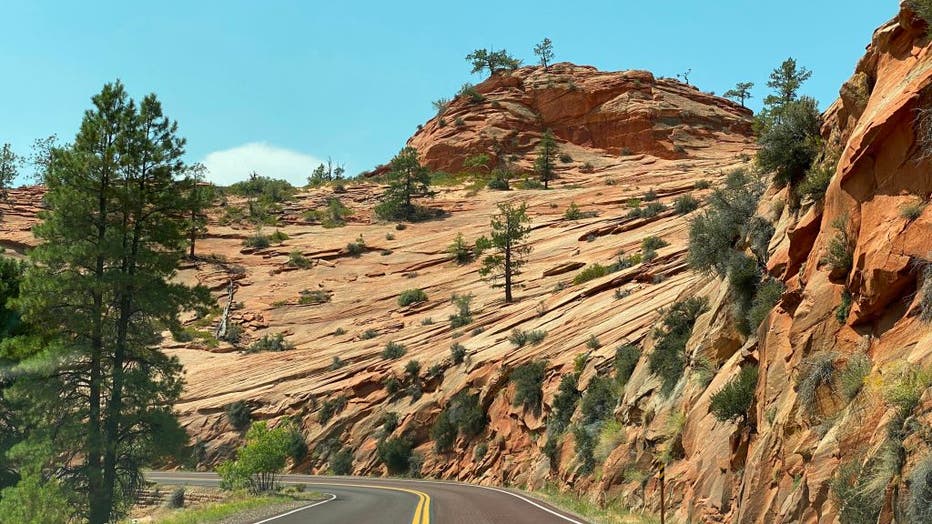 FILE - A scenic road winds through Zion National park, in Utah on Aug. 26, 2020. (Photo by DANIEL SLIM/AFP via Getty Images)

Officers eventually deployed spike sticks and exchanged gunfire as the suspect continued driving through the area. The vehicle crashed in Rockville and fled into a nearby neighborhood where he was found with a gunshot wound around 6:15 p.m.

The suspect was taken to a hospital for treatment, KSL-TV reported. His condition was not immediately released.

The investigation is ongoing. No further details about the shooting were immediately made available.

Shuttle buses inside the national park were briefly stopped as emergency vehicles sped through the park Wednesday evening.

Zion National Park is one of the nation's most popular parks. National Park Service data shows the park saw nearly 676,000 visitors in June, topping the number during the same period in 2019 by a wide margin.

The Associated Press and Kelly Hayes contributed to this report. It was reported from Los Angeles.