UPLAND, Calif. - Authorities arrested two pursuit suspects Friday after the pair ditched their dark-colored sedan and were picked up by another vehicle on the side of the highway as apparent "hitchhikers."

Police initially attempted to pull the driver over for equipment violations in Upland. Upland Police initiated the chase roughly around 12:15 p.m. before it was handed off to the California Highway Patrol.

The dark-colored sedan was seen driving at high speeds around surface streets in the Norwalk, Upland, Bellflower, South Gate and Long Beach areas. At times, the male driver was driving in the wrong direction as well as on curbs. The driver also blew through numerous red lights and damaged at least two other vehicles in hit-and-runs. 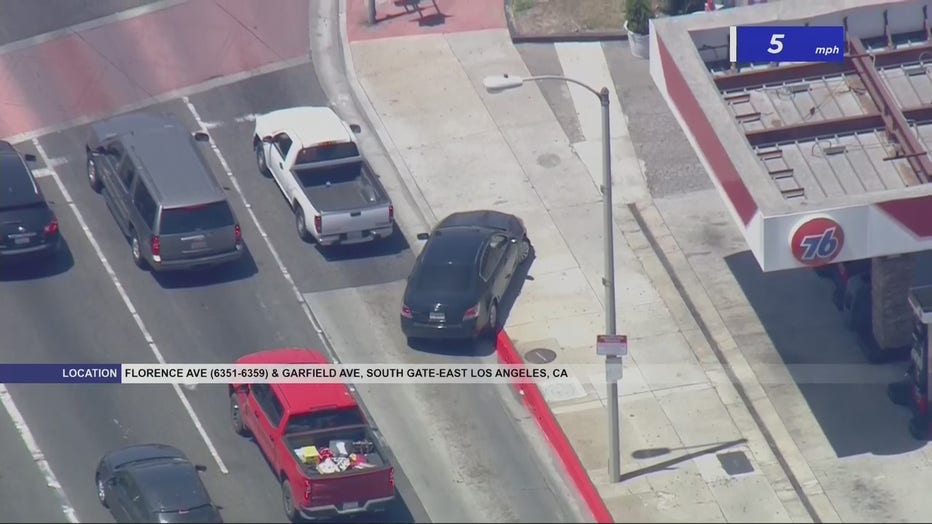 The front-seat passenger in the vehicle was seen at times with his arm out of the vehicle, with a cell phone in hand. It appeared as though the passenger was taking photos or videos mid-pursuit.

At one point, the suspect vehicle was blocked by trucks at Studebaker Road after exiting the Freeway, at which time the passenger opened his door and began to exit the vehicle, but he jumped back in the vehicle when the light turned green and the driver was able to take off again. 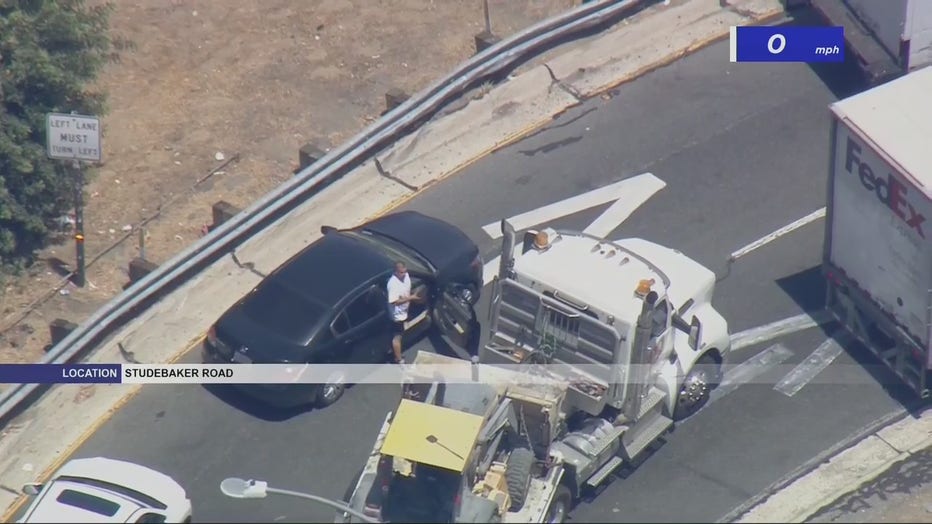 After law enforcement backed off the chase, both suspects exited their vehicle and appeared to attempt to carjack another vehicle. Their attempt was unsuccessful.

Two pursuit suspects exited their vehicle and appeared to attempt to carjack another vehicle.

A short time later, someone handed the suspect a bag through the car's window as the pursuit continued in the South-Gate-East Los Angeles area.

Someone handed the pursuit suspect a bag through the car's window as the pursuit continued in the South Gate-East Los Angeles area.

Authorities re-initiated the pursuit on the northbound 710 Freeway after the driver struck two vehicles, causing one vehicle to lose a bumper.

Around 2:15 p.m. the driver and passenger ditched their vehicle, ran up a hill and attempted to hitchhike. Eventually, the pair was picked up by another dark-colored sedan.

Drivers of a vehicle in a police pursuit attempt to hitchhike

Drivers of a vehicle in a police pursuit on Friday afternoon attempt to hitchhike another vehicle after abandoning a previous vehicle.

Only a few minutes later, nearly a dozen sheriff's cruisers had the new vehicle surrounded. The pair bailed from the vehicle on foot but were apprehended by deputies moments.

The driver and passenger in the vehicle that picked up the suspects were also detained by authorities.

Authorities arrested two pursuit suspects Friday after the pair ditched their dark-colored sedan and were picked up by another vehicle on the side of the highway as hitchhikers.