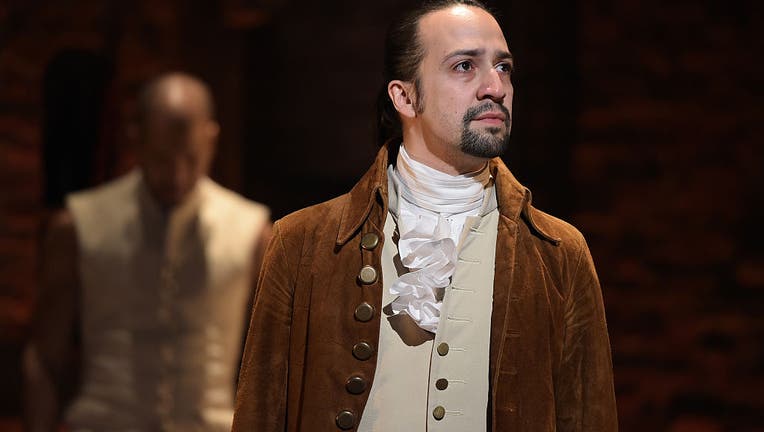 Actor, composer Lin-Manuel Miranda is seen on stage during "Hamilton" GRAMMY performance for The 58th GRAMMY Awards at Richard Rodgers Theater on February 15, 2016 in New York City. A filmed version of the acclaimed musical is set to premiere on Disn

Fourth of July festivities will look different this year as multiple cities ban large gatherings, beach outings and firework celebrations, but that doesn’t mean that there aren’t ways to be festive and celebrate America from the comfort of your own home.

There are plenty of movies that you can watch to get in the Independence Day spirit this holiday weekend.

These films may be available on one or multiple streaming platforms, either as part of your subscription or for an additional purchase.

OK, so this one technically isn’t a movie, but rather a filmed version of the hit Broadway musical. But still, there are few better way spend your Fourth of July weekend than watching the rapping raconteur Lin-Manuel Miranda as he dishes out a fresh new beat to American history on Disney Plus, available Friday.

This 1989 film follows the 54th Massachusetts Volunteer Infantry Regiment as they fight for uniforms, pay, combat missions and the freedom of their people. Though the 54th fell in the film’s final act, their heroics have inspired real-life monuments.

Mel Gibson stars as American revolutionary Benjamin Martin in this 2000 wartime fable. With Heath Ledger starring as his dashing son Gabriel and Jason Isaacs as a redcoat who isn’t afraid to get blood on his hands, director Roland Emmerich’s historical jaunt isn’t exactly the most accurate cinematic depiction of history, but still remains one of its most rousing.

Summarizing the scope and historical impact of Jackie Robison’s life and legacy in just 128 minutes seems like a futile endeavor. Still, with Chadwick Boseman as the MLB groundbreaker and Harrison Ford as Brooklyn Dodgers GM Branch Rickey, director Brian Helgelan succeeds in entertaining encourages about an American hero while encouraging them to learn more.

Selecting a stand-out moment from this 1993 coming-of-age baseball gem is an arduous endeavor. Is it when Benny “The Jet” Rodriguez outruns the Beast, or perhaps when the boys empty their stomachs on a rickety carnival ride? Hard to say, but there’s bound to be something in “The Sandlot’s” 101 minutes that stirs up some childhood, summertime nostalgia.

Starring Mark Wahlberg, Kevin Bacon and John Goodman, this 2016 flick follows the local and federal efforts who locate the terrorists behind the 2013 Boston Marathon Bombing.

In lieu of an actual Olympics this year, Disney’s “Miracle” is the closest thing you’ll get to seeing America take home the gold. This Kurt Russell underdog tale follows the ragtag 1980 Men’s Olympic Hockey team as they stage an improbable victory over the dominating Soviet skaters.

Also technically not a movie, but for a holiday that commemorates America’s independence, it’s hard not to select this epic Steven Spielberg miniseries about a group of men who fought so hard to defend it.

With a cherished score by Randy Newman and a soulful performance by Robert Redford, this 1984 baseball fable follows Roy Hobbs, a “natural” talent, throughout his slugging career.

Daniel Day-Lewis won his third Best Actor Oscar for his performance as America’s 16th president in Steven Spielberg’s eponymous biopic. Depicting Lincoln as he navigates the political and personal trenches of both the Civil War and trying to emancipate slaves, viewers are given a close insight into the man who would be remembered as one of the United States’ great leaders.

Who hasn’t had the desire to stroll out into a field of corn, hay or wheat, just to see if stray ghost or spirit whispers “if you build it, they will come?” Kevin Costner stars in this heartfelt tale about fathers and sons and the game that binds them.

“I’m going to steal the Declaration of Independence,” says Nicolas Cage’s Benjamin Gates in this 2004 Disney flick. We won’t spoil if he does or doesn’t, but we can say that this rollicking adventure will tickle all of your American history fancies, and then some.

With an all-star cast and Steven Spielberg behind the camera, “Saving Private Ryan” isn’t afraid to depict the gore and grit of the WWII frontlines as it weaves a somber tale about a group of American soldiers who risk their lives in attempts to help bring back home a man they have never met.

Additional films and shows on Tubi

If these films don’t fit your fancy, Tubi has a broad collection of top-notch baseball, military, war and American history content, all for free.

FOX Television Stations’ Jordan Smith contributed to this story. Tubi, and this station are owned by the FOX Corporation.