Hydra becomes latest costume to be picked off 'The Masked Singer'

On Wednesday night’s new episode of 'The Masked Singer,' the Hydra did not have enough tricks up their sleeve to keep them in the competition. (Credit: Michael Becker / FOX)

LOS ANGELES - The second round of "The Masked Singer" continued Wednesday night, as the remaining four singers in the group returned to battle it out.

While the celebrity contestants sang their hearts out, the Hydra did not have enough tricks up their sleeve to keep them in the competition.

The duo turned out to be world-renowned magicians Penn & Teller — part of Team Bad.

"Singing — it’s a really joyous thing to do, and we liked doing it. We don’t get to do it that much," Penn Jillette said during an exit interview.

Penn said some people are easily able to recognize his voice, so they decided to give Teller most of the singing. 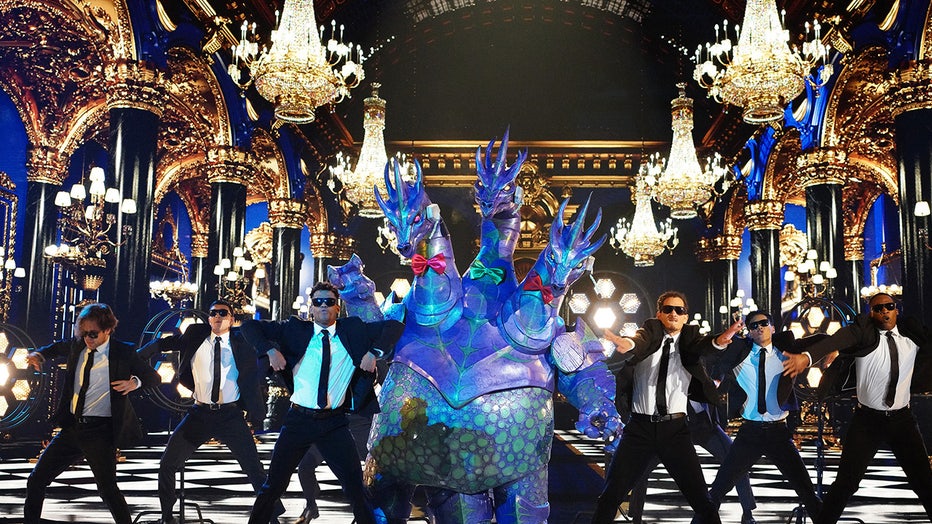 Panelists mistook their voices for many celebrities including Jeff Bridges, John Goodman and Steve Buschemi, notably as a trio from "The Big Lebowski" and Chevy Chase, Steve Martin and Martin Short from "The Three Amigos."

While Penn & Teller had to sing in what many would consider a complicated and elaborate dragon costume, the duo shared they were up for the challenge.

RELATED: ‘The Masked Singer’: Lemur leaps out of the competition after reveal

"They picked the right guys for it," Penn continued. "We’ve hung up-side-down in straight jackets, we have done underwater escapes, we have been in much smaller places than that."

Penn concluded, "This show does have a real mystery, a different kind of mystery than we do, so it was wonderful to join in."

Thingamabob turned out to be football offensive tackle for the Philadelphia Eagles Jordan Mailata on Wednesday’s new episode of 'The Masked Singer.' LiveNOW from FOX Host Stephanie Weaver spoke with the NFL superstar to learn about his experience. (Credit: FOX Entertainment)

On April 13, the Round Two winner will be announced, and two singers will be unmasked in a double-elimination episode.

In addition, actor Leslie Jordan will join the panelists’ desk as the remaining three singers from the round compete for a spot in the finale.

RELATED: ‘The Masked Singer's’ Jordan Mailata may become singer after NFL: ‘Of course, 100%’

Find out who will move on to the finals from Team Good, Team Bad, and Team Cuddly next Wednesday night on "The Masked Singer" on FOX.