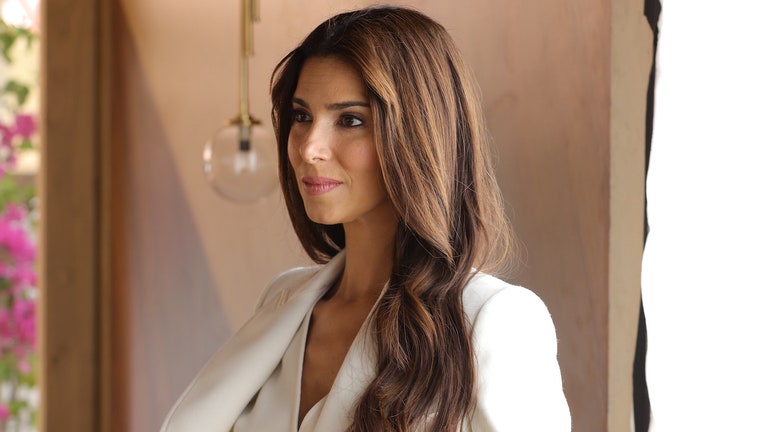 CHICAGO - There are few truly iconic costumes in pop culture history — and one of them is back, with a modern (and female) twist.

The original "Fantasy Island" endures in the imagination thanks in no small part to Mr. Rourke’s distinctive three-piece white suit, worn with panache by actor Ricardo Montalban. Now it returns in FOX’s "Fantasy Island" revival series, thanks to lead costume designer Allyson Fanger.

'Fantasy Island' returns, and so does the white suit — this time around, worn by Ms. Rourke (Roselyn Sánchez).

Fanger, a five-time Emmy nominee for Netflix’s Jane Fonda/Lily Tomlin series "Grace and Frankie," fully understood the significance of the costume as the image most associated with the classic original television series, which was created by Gene Levitt and aired from 1977 to 1984.

"I was so excited to bring back the white suit," Fanger said in a featurette for the new FOX series. "It’s what everybody thinks of [when they remember the original series.]"

Elizabeth Craft, writer and executive producer of the 2021 revival series, praised Fanger’s work, which updates the suit to fit both the present moment and the new performer who’ll be wearing the jacket.

"When I put on the white suit for the first time — wow, it was amazing," Sanchez shared.

"As an actor, I’m always looking for ways into my character and the suit brought me a sense of power, of security, of confidence."

FOX’s new take on "Fantasy Island" isn’t the first to set sail off the shores of the original. A one-season revival of the series aired in 1998, though that generation’s Rourke, played by Malcolm McDowell, opted for a darker suit instead.

Fanger’s more faithful design nevertheless brings a fresh twist to the costume, forgoing the shirt and black tie in favor of something breezier, sexier, and a little more island-friendly. Yet despite the updates, the suit is instantly recognizable as a spiritual descendant of the original — something it has in common with the character, as this Ms. Rourke is the grand-niece of the Mr. Rourke audiences met in the ‘70s.

"We did get really excited ... when we saw Rourke in her white suit for the first time ... I was sitting there with Liz and Sarah we all got a little teary," Fanger shared.

"There she was, and she was owning it, 100 percent. It was a gorgeous moment."

WATCH: Both original "Fantasy Island" series are available to stream for free on Tubi

"Fantasy Island" centers on a mysterious luxury resort that offers to fulfill each guests’ fantasy, though the island often has other ideas about what that fantasy might mean. The experiences can be transformational, both for the ever-changing guest list and the people who help keep the island running. The new "Fantasy Island" begins welcoming guests Aug. 10 at 9:00-10:00 p.m. ET/PT. New episodes arrive weekly on Tuesday.

About the writer: Allison Shoemaker is a Chicago-based pop-culture critic and journalist. She is the author of "How TV Can Make You Smarter," and a member of the Television Critics Association and the Chicago Film Critics Association. She is also a producer and co-host for the Podlander Presents network of podcasts. Find her on Twitterand Instagram at @allisonshoe.