CHESTER COUNTY, Pa. - Thousands of gallons of drilling mud spilled into a lake in Chester County from the controversial Mariner East pipeline project, according to the DEP.

Boating on the 500-acre Marsh Creek Lake in Chester County is scenic and relaxing but not far from the boat launch at the busy state park, buoys float warning of danger from a spill worrying those who come here for the beauty.

"I’m very concerned that something as beautiful and this would be damaged like it’s being damaged," one resident said.

Thirty acres of the lake used as drinking water locally is off limits after 8,100 gallons of “drilling mud” spilled Monday from a nearby construction site of the controversial Mariner East pipeline.

Environmental activist Ginny Kerslake paddled a FOX 29 photographer to the spill site where patches of drilling mud can be seen coating the lake floor.

"This is just the latest in a long line of accidents and violations on this egregious project, but it’s the one that’s hit home to most people because this is a treasure to many,” she said. 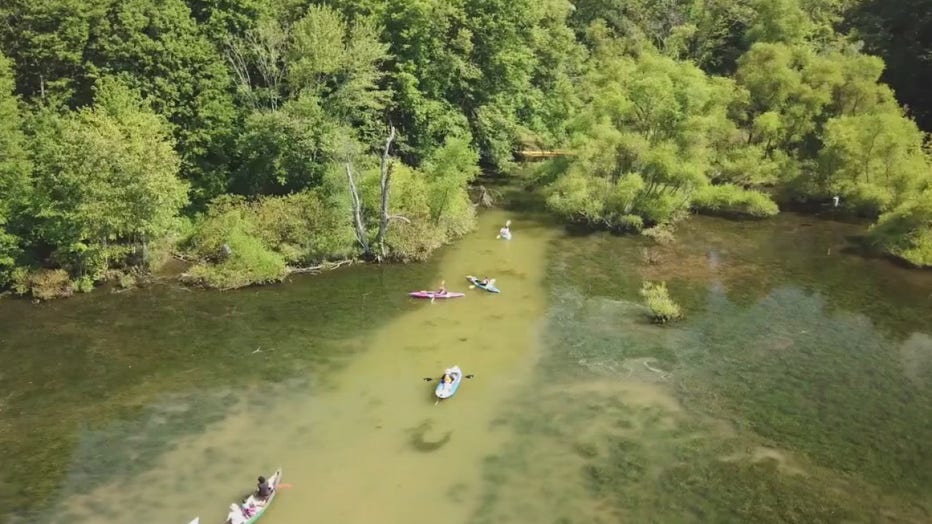 Along for the ride, a state representative part of a group of elected officials who are demanding the governor to pull the permits allowing Sunoco pipeline and the Energy Transfer Company to string Mariner East across the county.

“To see that much mud going into the lake we call part of our home was really devastating and knowing the impact of these things it was infuriating," Representative Danielle Friel Otten said.

Images shot from a drone obtained by FOX 29 show the milky-colored pollutants in the lake.

The Pa. Department of Environmental Protection says it’s investigating and warns, “DEP anticipates that there will be civil penalties and potentially other regulatory ramifications.”

Energy Transfer said a statement to FOX 29, "﻿Cleanup efforts continue at Marsh Creek Lake and will be ongoing as we conduct assessments, clean and restore the impacted area. We have deployed a number of crews including environmental specialists, professional geologists, operations and construction specialists, along with cleanup machinery such as pumps, vac trucks, tanker trucks, boats, sand bags and turbidy curtains to remediate and restore the area."