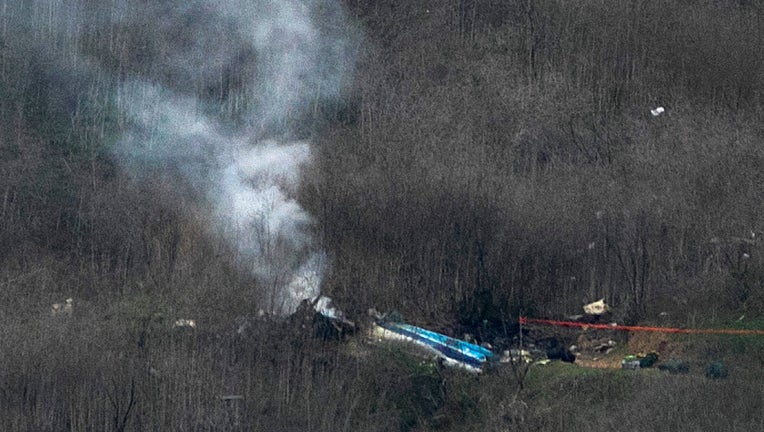 A timeline of the helicopter crash that killed Kobe Bryant and eight others in Southern California on Jan. 26. All times are approximate:

9:20 a.m. -- As the helicopter nears Burbank Airport airspace, the pilot requests to head west across the south side of the San Fernando Valley by following U.S. 101. He is told there are Instrument Flight Rules conditions with cloud tops at 2,400 feet (732 meters). He requests and is granted “special Visual Flight Rules” and then waits for other air traffic to clear.

9:32 a.m. -- The controller clears the pilot to follow Interstate 5 northwest, then follow State Route 118 to pass on the north side of Burbank and Van Nuys airports at or below 2,500 feet (762 meters). The pilot says he will loop around Van Nuys and head down to the 101 freeway. He requests “flight following,” which is radar assistance from air traffic control.

9:39 a.m. -- After handoff to a Van Nuys controller the pilot is given permission to turn southwest toward U.S. 101. He is advised to contact Southern California Terminal Radar Approach Control, known as “SoCal,” The pilot tells SoCal he is heading to Camarillo at 1,500 feet (457 meters). SoCal tells the pilot radar contact can’t be maintained at that altitude, and flight following services are terminated.

9:45 a.m. -- The pilot contacts SoCal, reports he is climbing above cloud layers and requests flight following services. A new controller asks the pilot to identify his flight and state his intentions. The pilot says he is climbing to 4,000 feet (1,219 meters) and is not heard from again. Radar shows the helicopter climbing to 2,300 feet (701 meters) and beginning a left turn. Eight seconds later it begins descending. The last data received from the craft was at 1,200 feet (366 meters) about 400 feet (122 meters) from the crash site. A witness says the helicopter emerged from mist and was visible for 1 to 2 seconds before hitting the hillside. It is traveling at more than 180 mph (290 kph).