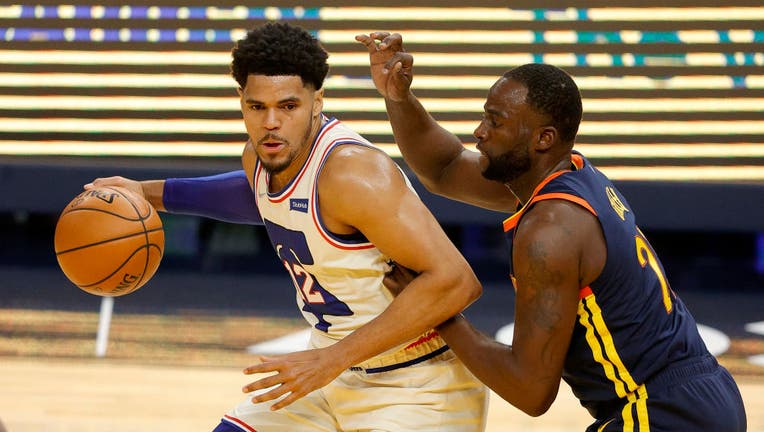 PHILADELPHIA - The way his Philadelphia 76ers are winning, coach Doc Rivers sees no reason to discuss the trade deadline.

Tobias Harris hit a go-ahead jumper with 3:44 to play, scored another basket on the next possession and finished with 25 points and 13 rebounds to help the Sixers hold off the Golden State Warriors 108-98 on Tuesday night.

"My attitude is not to get the highlights, get the praise, it’s to get the win," Harris said.

Rivers likes how Harris has improved from game to game.

"What I liked about his game tonight, he didn't force it, he kind of just let the game come to him," Rivers said. "And he made plays, not just with his shot but with the pass. Played phenomenal defense."

Ben Simmons added 22 points and eight rebounds for the Sixers, who pulled off their second consecutive road win after a 101-100 victory at New York on Sunday. The Eastern Conference leaders improved to 31-13 with their ninth victory in 10 games.

"As a group, we've won nine out of 10 games, the guys are playing good basketball — no need to talk about it," Rivers said about Thursday's deadline.

Kelly Oubre Jr. had 24 points and 10 rebounds to carry the load for the Warriors, with his name popular in trade conversations.

Jordan Poole added 19 points for the short-handed Warriors, who roared back with a big third quarter after trailing by 24.

"This was a tough loss. We fought till the end," Andrew Wiggins said. "Nice comeback and all but we didn’t close at the end."

Stephen Curry missed his third straight game with a bruised tailbone since falling hard on his backside at Houston last Wednesday and won't play for at least a week, Kerr said before the game.

Younger brother Seth Curry of the Sixers also sat out after spraining his left ankle last Wednesday in an overtime loss to the Bucks. He missed his third straight game.

One member of the family delivered with a big night: Their brother-in-law, Damion Lee, scored 16 points for Golden State in 24 minutes off the bench.

Rookie center James Wiseman returned from the NBA's health and safety protocol after missing three games and will stay in the starting lineup indefinitely, Kerr said.

A moment of silence was held before tipoff for Hall of Famer Elgin Baylor, who died Monday at age 86.

Stephen Curry had an MRI and the test revealed inflammation in the tailbone. He will miss at least the next two games for Golden State before being re-evaluated in a week. Poole started in Curry’s place again.

Kerr sat sternly in front of a black background featuring 18 names — representing each of the people killed in mass shootings over the past week in Atlanta and Boulder, Colorado.

Before Kerr began to talk basketball, he delivered yet another message about gun violence that hits so close.

Kerr's father, Malcolm, was murdered in Beirut while president of American University of Beirut when Kerr was 18 and a college freshman at Arizona.

76ers: Philadelphia earned its first win on Golden State's second-year home court in Chase Center, having last won on the Warriors' floor with a 113-104 victory on Jan. 31, 2019. The 76ers lost 118-114 in San Francisco on March 7 last year — Golden State's second-to-last game before the NBA shut down for COVID-19. Philadelphia returned home to host the Pistons before the season was halted. ... The Sixers have the second-best record in the NBA behind Utah.

Warriors: F Eric Paschall, like Wiseman, returned from COVID-19 protocols. ... Poole was named to the All-NBA G League third team after averaging 22.4 points, 5.3 rebounds and 3.6 assists in 33.4 minutes over 11 games for Santa Cruz. He shot 45.1%. ... The Warriors have four straight games in the state of California. ... C Kevon Looney also was back after sitting out the second of consecutive games at Memphis because of a false positive coronavirus test.

76ers: At the Los Angeles Lakers on Thursday night for the third stop on their six-game trip.