PENNSYLVANIA - Many of the attacks against Pennsylvania's health secretary have little to do with the way she has handled the statewide response to the coronavirus pandemic.

As a transgender woman, Dr. Rachel Levine has been subjected to a stream of mockery and abuse on social media and elsewhere. Every time she goes on camera to update the public and implore Pennsylvanians to wear masks, wash their hands and "stay calm, stay alert and stay safe," ugly comments and memes follow. 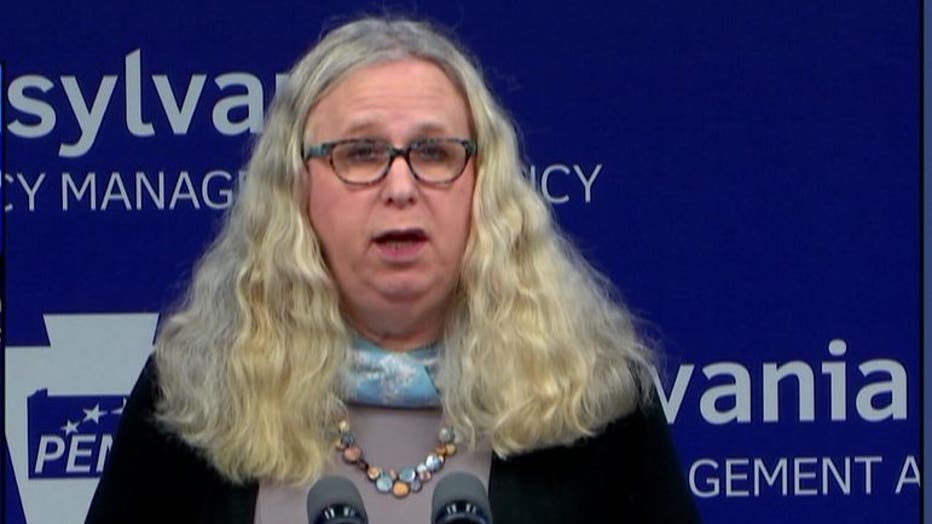 Over the weekend, one of the state's most popular fairs — the 165-year-old Bloomsburg Fair — found itself in hot water after posting a photo of a man in a dunk tank who had donned a blond wig, floral-print dress and glasses. The dunk tank was part of a weekend carnival held on the fairgrounds to benefit the region’s volunteer fire departments.

"Dr. Levine? Thank you you were a hit and raised a lot of money for the local fire companies. Wonder why so many were trying to dunk you," said the Bloomsburg Fair Association's post, which included a smiley-face emoji.

The fair deleted the post from its Facebook page, but critics slammed the dunk tank impersonation and the fair association's comment as transphobic. U.S. Sen. Bob Casey, a Democrat, and other politicians issued statements of condemnation. Some people said they planned to skip this year's fair, scheduled for late September.

In a written statement, the fair said that Levine's likeness was used to raise money for fire departments whose fundraising has been hampered by COVID-19, and had nothing to do with her gender identity. The statement pointed out she's a public figure.

"A fellow dressed up in a dress to get people to throw balls at the dunk tank to raise money. It turned into where people thought we were offending Dr. Rachel Levine, and that was no intention at all," said Fair President Randy Karschner.

The Press Enterprise newspaper of Bloomsburg identified the man in the dunk tank as Main Township Fire Chief David Broadt, who told the newspaper he did not set out to impersonate Levine — he said he was "going for a Marilyn Monroe look" — but decided to play along once he got into the dunk tank and people started saying he resembled Levine and shouting, "Where’s your mask?"

"It was just in fun," Broadt said. "It wasn't done to disrespect her."

Levine and her boss, Democratic Gov. Tom Wolf, have been highly visible throughout the pandemic, imposing statewide shutdown orders and frequently briefing the public on what's being done to combat the virus. They ordered thousands of businesses to temporarily close as the virus swept through Pennsylvania this spring, and recently reimposed some statewide pandemic restrictions as it flared in the Pittsburgh area.

Republicans and small business owners have criticized Wolf and Levine for governmental overreach and tried unsuccessfully to get pandemic restrictions thrown out in court. Republicans have also faulted the Wolf administration over Pennsylvania's high number of nursing home deaths.

While Wolf has been called a "dictator," some of the critics have zeroed in on Levine's gender identity.

Paul Abel, a commissioner in Scott Township, outside Pittsburgh, resigned after saying at a public meeting he was "tired of listening to a guy dressed up like a woman."

In Hellam, a small community in south-central Pennsylvania, the administrator of the recreation commission's Facebook page posted a meme that said: "If you are ordered to wear a mask by a guy who wears a bra, you might be Pennsylvanian," a riff on comedian Jeff Foxworthy's "You Might Be a Redneck If …" routine. The mayor denounced the post and said it "does NOT represent who we are or what we feel."

A Pittsburgh radio personality repeatedly called Levine "sir" while questioning the health secretary during a press call, prompting Levine to respond: "Please don't misgender me ... It’s really insulting." On social media, Levine is often misgendered or called Richard, the name she was given at birth.

The invective prompted the Pennsylvania Commission on LGBTQ Affairs, a group established by Wolf in 2018, to issue a statement last month in support of Levine.

Levine "has been met with some of the most vile and toxic transphobia our Commission has seen in our commonwealth in recent years," the statement said. "Week after week, members of the LGBTQ community and thousands of Pennsylvanians have tuned in to be informed by our Health Secretary only to be assaulted by streams of comments and slurs aimed directly at Dr. Levine and indirectly at all transgender Pennsylvanians."

Levine, a pediatrician who became state health secretary in 2017, is one of the few transgender people nationwide serving in either elective office or as a high-ranking government appointee.

Levine's spokesperson, Nate Wardle, said she "remains laser-focused on protecting the health and well-being of Pennsylvanians as we navigate this ongoing pandemic." Wardle said Levine would not comment further.

Others didn’t hesitate to weigh in.

"Dr. Levine is an honorable public servant whose tireless work to keep PA safe and healthy has saved countless lives. She is owed an apology," Casey tweeted.

“The COVID-19 pandemic has brought hate and transphobia into the spotlight through relentless comments and slurs directed at Secretary of Health Dr. Rachel Levine, who is a highly skilled, valued, and capable member of my administration and Transgender. The derogatory incident involving the Bloomsburg Fair is the latest of these vile acts, which by extension impact Transgender people across the commonwealth and nation.

He added, Dr. Levine is a distinguished and accomplished public servant. She is committed to keeping Pennsylvanians safe and healthy, even those who direct hate-fueled attacks at her. I’m proud of the work she has done in her five years serving Pennsylvanians, and her success at leading our commonwealth during the COVID-19 crisis is a testament to her intelligence and work ethic. Hate has no place in Pennsylvania, even in the smallest transphobic joke, action or social media post. I’m calling upon all Pennsylvanians to speak out against hateful comments and acts, including the transphobia directed at Dr. Levine and all Transgender people in our great commonwealth.”