The U.S. military is accusing Iranian naval vessels of making repeated “dangerous and harassing” approaches to U.S. ships in the Persian Gulf near Kuwait.

WASHINGTON (AP) - A group of 11 Iranian naval vessels made “dangerous and harassing” maneuvers near U.S. ships in the Persian Gulf near Kuwait on Wednesday, in one case passing within 10 yards (meters) of a Coast Guard cutter, American officials said.

Iranian officials did not immediately acknowledge the incident, which comes after armed men believed to be from Iran's Revolutionary Guard seized a Hong Kong-flagged tanker.

The American vessels included the USS Paul Hamilton, a Navy destroyer, the USS Lewis B. Puller, a ship that serves as an afloat landing base, and the USCGC Maui. The ships were operating with U.S. Army Apache attack helicopters in international waters, the statement said.

The “dangerous and provocative actions increased the risk of miscalculation and collision ... and were not in accordance with the obligation under international law to act with due regard for the safety of other vessels in the area,” the statement said. 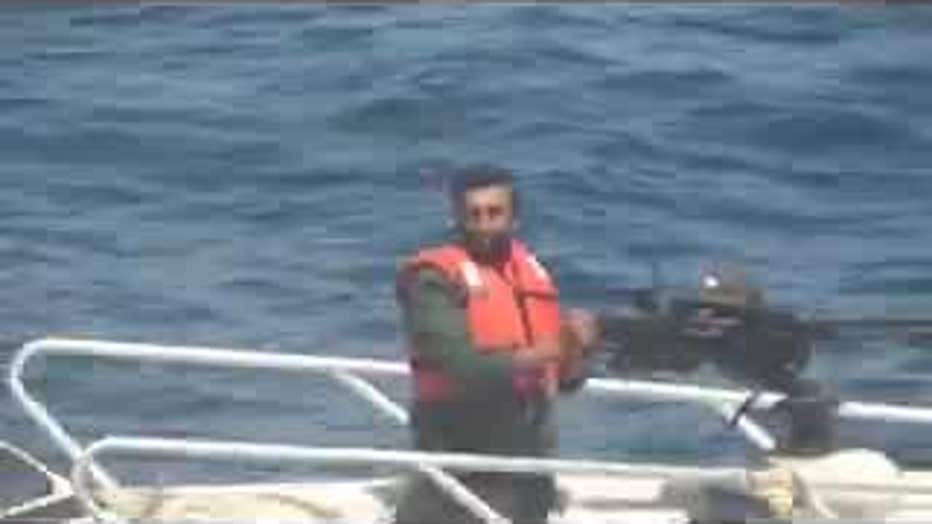 The U.S. military is accusing Iranian naval vessels of making repeated “dangerous and harassing” approaches to U.S. ships in the Persian Gulf near Kuwait. (Credit: US Navy via Storyful)

The Americans issued multiple warnings via bridge-to-bridge radio, fired five short blasts from the ships’ horns and long-range acoustic noise maker devices, but received no immediate response, the statement said. After about an hour, the Iranian vessels responded to the bridge-to-bridge radio queries, then maneuvered away.

The semiofficial Fars news agency, believed to be close to the paramilitary Guard, acknowledged the incident in a report that did not include any comment from Iranian officials.

Tense incidents remain common between Iranian and U.S. forces in the Persian Gulf and its narrow mouth called the Strait of Hormuz, through which a fifth of all the world's oil passes. Iran seized ships last summer and the U.S. accuses it of attacking tankers in the region amid tensions over President Donald Trump unilaterally withdrawing America from Tehran's nuclear deal with world powers.

On Tuesday, armed men boarded and briefly held the Hong Kong-flagged tanker SC Taipei and its Chinese crew before releasing the vessel.

The U.S.-led International Maritime Security Construct, a group created to deter Iranian attacks in the region, acknowledged the incident in a statement late Wednesday. The group said it “assessed no immediate threat to the free flow of shipping in the area.”