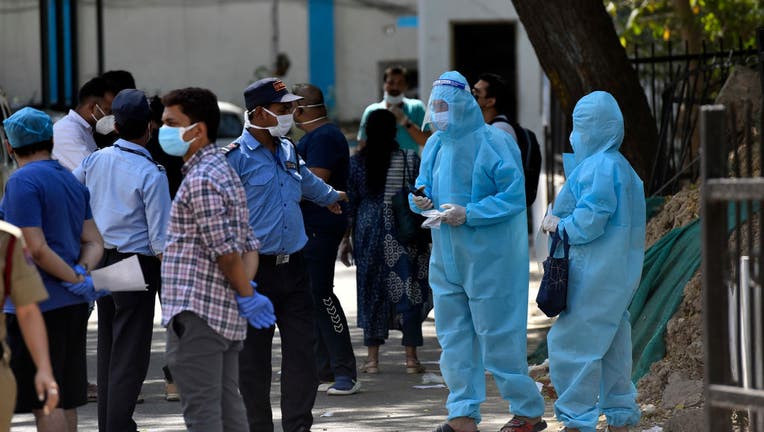 The United States has pledged immediate medical aid to India to help combat its surge in coronavirus cases.

For the fourth straight day, India on Sunday set a global daily record of new coronavirus infections, spurred by an insidious new variant that emerged there.

The 349,691 confirmed infections over the past day brought India’s total to more than 16.9 million cases, behind only the U.S. The Health Ministry reported another 2,767 deaths in the past 24 hours, pushing India’s fatalities to 192,311.

President Joe Biden tweeted about the assistance Sunday, saying the country is "determined" to help.

According to the White House statement, the U.S. is "working around the clock" to immediately deploy to India drug treatments, rapid diagnostic COVID-19 testing kits, ventilators and personal protective equipment and will seek to provide oxygen supplies as well.

The White House says it had identified sources of raw material urgently needed for India’s manufacture of the Covishield vaccine and will make that available. The U.S. also intends to pay for an expansion of manufacturing capability for BioE, the vaccine manufacturer in India, so it can ramp up and produce at least 1 billion doses of COVID-19 vaccines by the end of 2022.

A team of U.S. public health advisers from the Centers for Disease Control and Prevention and USAID will also be sent to assist Indian officials.

Earlier on Sunday, Dr. Anthony Fauci, the Biden administration’s top medical adviser on the pandemic, told ABC’s "This Week" that several measures to help India were being considered.

The unfolding crisis there is most visceral in overwhelmed graveyards and crematoriums. The situation is equally grim at unbearably full hospitals, where desperate people are dying in line, sometimes on the roads outside, waiting to see doctors.

Health officials are scrambling to expand critical care units and stock up on dwindling supplies of oxygen. Hospitals and patients alike are struggling to procure scarce medical equipment that is being sold on the black market at an exponential markup.

Tanker trucks arrived for filling with liquid oxygen in Visakhapatnam, India, on April 22, part of the country's effort to help with dangerously low levels at hospitals. Credit - RINL via Storyful

The breakdown is a stark failure for a country whose prime minister only in January had declared victory over COVID-19, and which boasted of being the "world’s pharmacy," a global producer of vaccines and a model for other developing nations.

Caught off-guard by the latest deadly spike, the federal government has asked industrialists to increase the production of oxygen and other life-saving drugs in short supply.

RELATED: India's capital to lock down amid devastating coronavirus surge

Fauci also said Sunday that the U.S. would review how to help increase India’s vaccine supply, such as by sending them doses or helping them "to essentially make vaccines themselves."

He said, quote: "Bottom line, it’s a terrible situation that’s going on in India and other lower middle-income countries, and there is more we can do.