It’s the first time since 2010 that the federal government is sending U.S. firefighters to help combat bushfires in Australia.

BOISE, Idaho - As wildfires have torn across Australia in recent weeks, devastating many parts of the country and claiming at least 17 lives, the U.S. has sent more than 100 firefighting personnel to help combat the inferno, and another 50 to 60 are set to depart on Monday, according to the National Interagency Fire Center.

It’s the first time since 2010 that the federal government is sending U.S. firefighters to help combat bushfires in Australia.

The country is experiencing what is considered to be its worst fire season on record due to extended drought combined with hot and dry weather conditions that have drastically elevated fire risk across much of the country, with most of the destruction focused in the states of New South Wales, Queensland and Victoria.

“We’re sending a contingent from several federal agencies that reflects decades of fire management experience,” said U.S. Forest Service Fire Director Shawna Legarza. “We face many of the same firefighting challenges in each country. We’ve utilized their expertise in the past and welcome the opportunity to reciprocate.”

The last time there was an exchange between Australia and the U.S. was in August of 2018, when 138 Australian and New Zealand fire personnel spent nearly 30 days assisting with wildfire suppression efforts in Northern California, Oregon and Washington.

At least 16 of the fire personnel sent to assist in Australia are from California, where wildfires burned thousands of acres earlier this year.

The first group of U.S. firefighters was sent to Australia on Dec. 5, according to the NIFC, which is the government agency that is coordinating the deployment of U.S. personnel to Australia. A second group was deployed Dec. 19, and a third group on Dec. 30, all of which will be working 30-day deployments.

The NIFC reports that a fourth group will be departing Saturday, followed by a fifth group Monday.

The U.S. has sent personnel from a variety of government agencies, including the Bureau of Land Management, the National park Service, the Bureau of Indian Affairs, the U.S. Fish and Wildlife Service and the U.S. Forest Service.

“This exchange demonstrates the value of our arrangement for mutual wildland fire support with Australia. It’s a valuable tool for both countries as we face increasingly complex and challenging fires,” said Department of the Interior’s Office of Wildland Fire Director Jeff Rupert. “The interagency team of professionals will share expertise from managing wildland fire under a variety of locations and conditions in the U.S., many of which are similar to what they’ll encounter in Australia.”

With Australia’s hot season nowhere near over, many are predicting that the devastation will get much worse in coming weeks.

“We have three months of hot weather to come. We do have a dynamic and a dangerous fire situation across the state,” Victoria Emergency Commissioner Andrew Crisp said.

The early and calamitous start to Australia’s summer wildfires has led authorities to rate this season the worst on record. 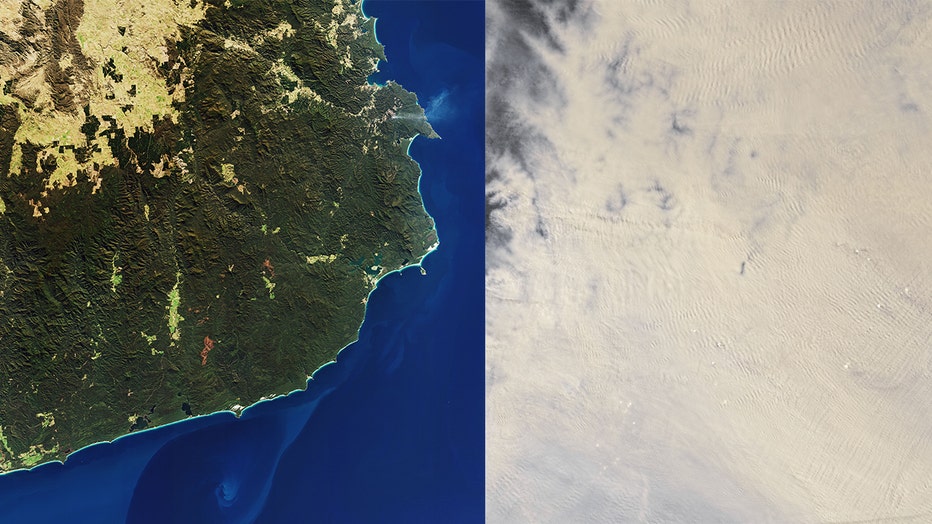 Satellite photos of the Australian coastline by the town of Mallacoota taken of the same geographic region about five months apart show the dramatic smoke cover caused by bushfires. Left: July 24, 2019. Right: Jan. 1, 2019.

Australia deployed military ships and aircraft Wednesday to help coastal communities ravaged by apocalyptic wildfires that have sent thousands of residents and holidaymakers fleeing to the shoreline.

Some 4,000 people in the coastal town of Mallacoota fled to the shore as winds pushed a fire toward their homes under a sky darkened by smoke and turned blood-red by flames. Stranded residents and vacationers slept in their cars, and gas stations and surf clubs transformed into evacuation areas. Dozens of homes burned before winds changed direction late Tuesday, sparing the rest of the town.

About 12.35 million acres of land have burned nationwide over the past few months, with at least 17 people dead and more than 1,000 homes destroyed.

Smoke from the wildfires meant Canberra, the nation’s capital, on Wednesday had air quality more than 21 times the hazardous rating of the worst air quality in the world.

The smoke has also wafted across the Tasman Sea and into New Zealand.

During a Thursday visit to Cobargo, a village in the southeast area of NSW that has been utterly ravaged by the wildfires, Prime Minister Morrison was confronted with criticism by many who had lost everything in the fires, who said not enough was being done to mitigate the spread of the fires.