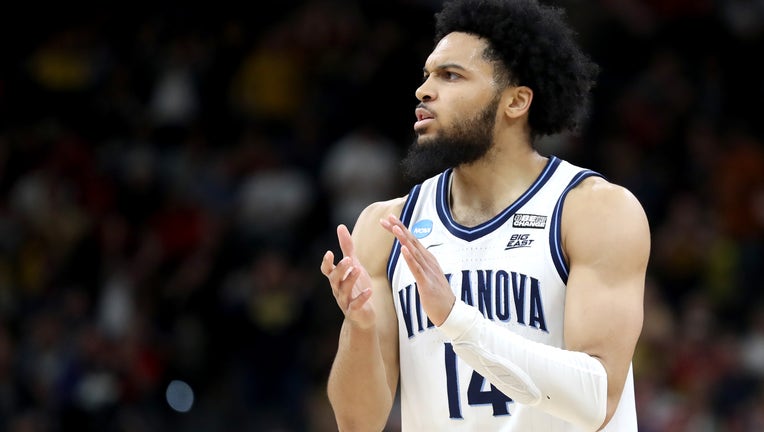 SAN ANTONIO, TEXAS - MARCH 24: Caleb Daniels #14 of the Villanova Wildcats reacts during the first half of the game against the Michigan Wolverines in the NCAA Men's Basketball Tournament Sweet 16 Round at AT&amp;T Center on March 24, 2022 in San

PHILADELPHIA - Villanova began the season among the figurative favorites to reach the Final Four.

The Wildcats were ranked No. 4 and boasted a veteran roster that reached all the way back to the 2018 national championship season.

But by mid-December, they already had four losses in a rough schedule, taking a beating from defending national champion Baylor and losing their Big East opener to Creighton.

Wright said he put his team in a "bad spot" with the brutal early schedule that also included losses to UCLA and Purdue, two other other programs that would eventually reach the Sweet 16 of the NCAA Tournament.

"I felt like we were worn down, and we were in finals, and Baylor played great. And that place was rockin' if you were there," Wright said. "We battled, we never gave up in that Baylor game. And I think we learned some things from that Creighton game. After that, I think we got it going."

The Wildcats (29-7) certainly did. Now the No. 2 seed, having beat Michigan in a grinding, physical 63-55 win, faces No. 5 Houston (32-5) on Saturday in the South Region final to get back to where Villanova had been expected all along: the Final Four.

Those cold days of losing in December sure weren't fun, but the Wildcats had plenty of experienced players to lean on to pull them out of it like Collin Gillespie and Jermaine Samuels. They were freshmen on the 2018 national title team and lead the Wildcats this season in scoring and rebounding, respectively.

The 57-36 loss to Baylor was the fewest points Villanova had scored in 21 seasons under Wright. Gillespie, who would later earn Big East player of the year honors, scored just six points that day, Samuels just two. Then came the 0-1 start in the Big East.

"It was me, Collin and Justin (Moore) just taking ownership .... I think what we did was took it upon ourselves to every day get better in practice. We knew that our journey our goal was to be the best Villanova basketball team at the end of the season," Samuels said. "Obviously, we knew there were going to be bumps in the road."

Gillespie said a critical part was keeping the team from fracturing under the stress. He didn't play in last season's NCAA Tournament run to the Sweet 16 because of an injured knee and didn't want to miss his last chance to return.

"We talked about sticking together," Gillespie said.

The Wildcats won nine of their next 10. The only real blip the rest of the season was dropping a regular-season sweep to Marquette.

The Wildcats ran through the Big East Tournament, then won their NCAA Tournament opener against Delaware by 20. They followed that with a win over Ohio State in a game they never trailed.

The Sweet 16 matchup with Michigan was different, a dogfight in which Samuels not only led the scoring with 22 points but also a defensive effort that tied up the Wolverines' 7-foot-1 center Hunter Dickinson.

Wright said immediately after the Michigan game his team was "beat up" by the physical nature of that game.

The Wildcats recovered from the fatigue of mid-December. They will have to do it again to get the Final Four. And that rough early schedule full of NCAA Tournament heavyweights should have them ready for it.

"It's about surviving now," Wright said.