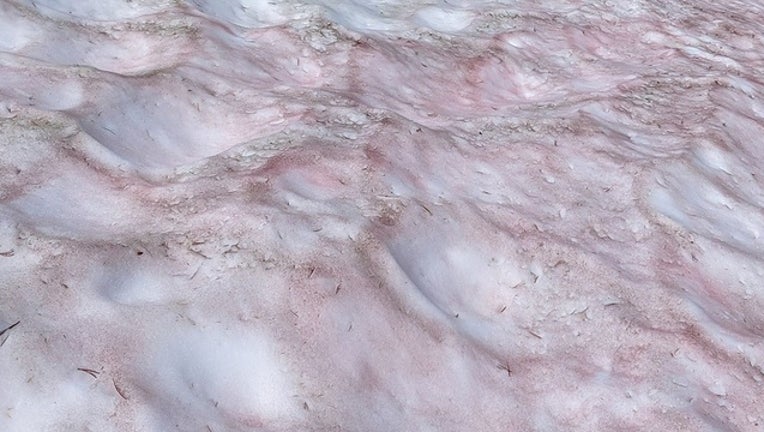 The reddish colored snow often called "watermelon snow" is actually caused by a cold-loving algae that live in the snow, according to the National Park Service ((Yosemite National Park))

FOX News - As the so-called dog days of summer have finally arrived, the still-frozen slopes of Yosemite National Park are now sporting what some may know as "watermelon snow" -- but don't confuse it for the popular summertime treat.

Yosemite National Park in California shared photos last Sunday to Facebook of the sight at an unnamed lake in the high country above 9,500 feet.

"It may be August, but there is still plenty of snow and ice above 9,500 feet!" the park said on Twitter. "This reddish colored snow is often called watermelon snow."

Watermelon snow -- also known as "blood snow" or simply red snow -- is what happens when snow above 9,500 feet lasts through the summer months.

The color one sees comes from cold-loving algae known as Chlamydomonas nivalis, which "thrives" in temperatures below freezing and liquid water, and lives on the snow.

"This algae is typically green but contains a special red pigment called a carotenoid that acts as a protective barrier, shielding the algae's chlorophyll," park rangers stated on Facebook. "Since chlorophyll is necessary for its survival, it uses this natural type of sunscreen to protect itself from too much heat and damaging UV radiation."

The pigment produced by the algae then dyes the surrounding area a darker color, giving the snowfield a pink or red color. It also can allow the snow to heat up faster and melt quickly, according to the park. 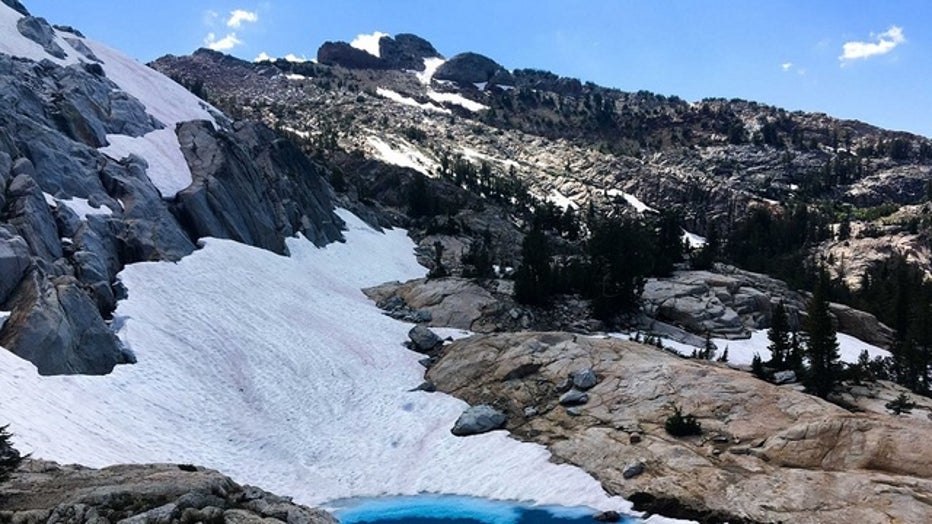 The reddish colored snow often called "watermelon snow" is actually caused by a cold-loving algae that live in the snow, according to the National Park Service ((Yosemite National Park))

The images shared by park officials were from an unnamed lake in the high country.

While the sight may be very photogenic, officials also took time to caution hikers that most trails in the high country still have variable conditions, such as snow, mud, water crossings, and other hazards.

"Hikers and backpackers should be aware that trail conditions can change throughout the day. If conditions are not ideal for you, turn back, and try your hike or backpacking trip another time," park officials said. "It is not worth risking your safety to finish your hike."

The phenomenon is not just limited to Yosemite and has been spotted at Mount Rainer National Park and other locations in Washington state.

One can typically spot the red-tinted snow in midsummer, when snow remains in places where there is the maximum amount of sunlight in a day, according to Scientific American.

And while the sight shares the name with the popular summer fruit, experts recommend not attempting to try out how watermelon snow may taste.

Botanist Joyce Gellhorn noted in her 2002 book "Song of the Alpine: The Rocky Mountain Tundra Through the Season" that scientists discourage people from tasting watermelon snow because of its "laxative effects."