Hispanic Heritage Month is observed from Sept. 15 to Oct. 15.

Hispanic Heritage Month is celebrated from Sept. 15 to Oct. 15 in the United States to honor and recognize the "achievements and contributions of Hispanic American champions who have inspired others to achieve success," according to U.S. National Archives.

The observation was first recognized by President Lyndon B. Johnson in 1968 and was later expanded by President Ronald Reagan in 1988 into a full month, the official site HispanicHeritageMonth.gov explains.

President Joe Biden officially recognized the start of Hispanic Heritage Month on Wednesday and stated the month-long observation is a critical reminder "of how much strength we draw as a Nation from our immigrant roots and our values as a Nation of immigrants," according to his official proclamation.

Here are some fast facts about Hispanic Heritage Month in the U.S., including why it begins mid-September. 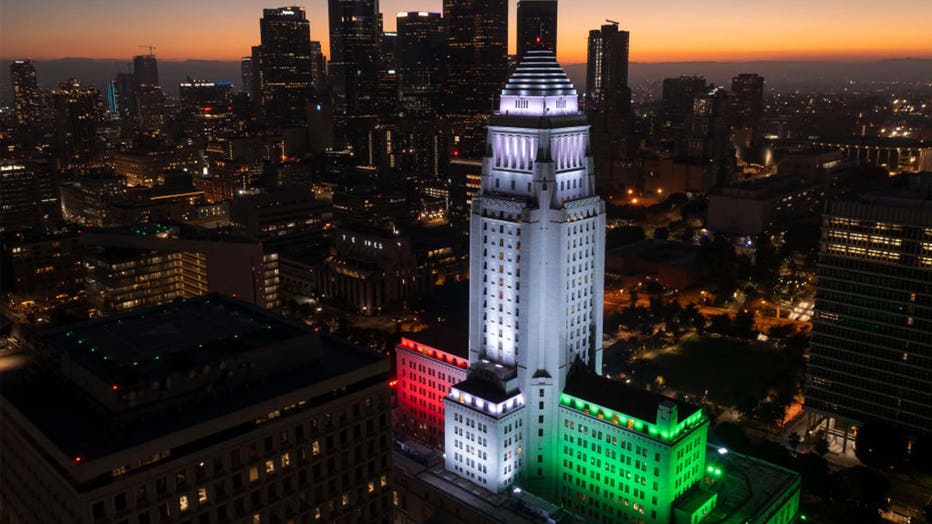 FILE - In an aerial view, the Los Angeles City Hall is lit in the colors of the Mexican flag to mark 200 years of Central American independence from Spain during the first night of National Hispanic Heritage Month on Sept. 15, 2021 in Los Angeles, Ca

"During subsequent celebrations of Hispanic Heritage Week, Presidents issued public statements and hosted receptions while praising the contributions of Hispanic Americans to U.S. society," according to the History, Art & Archives of the United States House of Representatives.

In 1987, Rep. Esteban Torres, from California, introduced a bill that would expand Hispanic Heritage Week into a full month.

Torres said that supporters of the legislation "want the American people to learn of our heritage. We want the public to know that we share a legacy with the rest of the country, a legacy that includes artists, writers, Olympic champions, and leaders in business, government, cinema, and science," according to the House of Representative archives.

While the bill did not survive, Sen. Paul Simon, of Illinois, later introduced a similar bill that passed through Congress and President Ronald Reagen signed it into law on Aug. 17, 1988.

Why is Hispanic Heritage Month celebrated from the middle of September to October?

Hispanic Heritage Month is celebrated from Sept. 15 to Oct. 15 because many significant anniversaries of Latin American independence fall on Sept. 15, including Costa Rica, El Salvador, Guatemala, Honduras and Nicaragua, according to Hispanicheritagemonth.gov.

In addition, Mexico and Chile celebrate their independence days on Sept. 16 and Sept. 18. Columbus Day or Día de la Raza, which is Oct. 12, also falls within this 30-day timeframe, the website explains.

Growing Hispanic population in the U.S.

As of 2019, 60.5 million Hispanic people reside in the U.S., which makes up about 18.4% of the entire country’s population, according to the U.S. Census Bureau.

Mexicans made up the largest group of Hispanics that live in the country, followed by Puerto Ricans, Central Americans, South Americans and Cubans, the bureau added.

The Hispanic population is one of the fastest-growing in the country, according to the Pew Research Center.

"The U.S. population grew by 22.7 million from 2010 to 2020, and Hispanics accounted for 51% of this increase, a greater share than any other racial or ethnic group," according to Pew.

Contributions from the Hispanic community that go under the radar

Claudio Castillón Lévano, born in Peru, created the original neonatal artificial bubble for newborns who are at high risk, according to the United States Patent and Trademark Office (USPTO).

Fernando Torres, born in Nicaragua, is credited with creating the SIM card in mobile devices which allows users to move all of their contacts and important information from phone to phone and allows them to connect to a cellular network, according to the USPTO.

Luis Von Ahn, born in Guatemala, invented the modern CAPTCHA, "a tool that enables websites to distinguish between bots and real people, and invented reCAPTCHA, a variation that digitized books as people solved each CAPTCHA puzzle," according to Carnegie Mellon University.

Von Ahn also went on to create Duolingo, "a free service for learning languages that now boasts more than 300 million users worldwide," according to CMU. In 2019, Duolingo became Pittsburgh's first "unicorn," or a tech startup valued at more than $1 billion, the university said.

Dr. Ellen Ochoa, who is of Mexican descent, was born in California and was the first Hispanic woman to embark on a nine-day space mission aboard the Discovery space shuttle in 1993, according to NASA.

"She has 3 patents in the area of optical information processing and numerous publications in technical journals," according to the National Science Board. Ochoa was also recognized with NASA's highest award, the Distinguished Service Medal, and the Presidential Distinguished Rank Award.

This story was reported out of Los Angeles.