A Hershey-area state lawmaker addressed what he called 'hateful comments' towards the unmasked community.

HARRISBURG, Pa. - Governor Tom Wolf is speaking out after a Hershey-area lawmaker addressed what he called hate towards the 'unmasked community' in a statement that mirrored the state health secretary's response to transphobic attacks.

“Rep. Diamond’s press release is nothing more than a thinly veiled attack on the LGBTQ community and the commonwealth’s Secretary of Health, Dr. Rachel Levine, a transgender woman, and a nationally respected leader in public health, whose bravery and resolve in the face of constant attacks is laudable," Wolf added.

On Wednesday, Rep. Diamond issued a lengthy statement addressing the "hateful and intolerant comments directed towards the unmasked community in Pennsylvania."

Diamond's statements closely mirror those made by Pennsylvania Health Secretary Dr. Rachel Levine earlier this week in response to ongoing transphobic attacks she has faced since the start of the coronavirus pandemic.

At times, Diamond's statement matches Dr. Levin's comments word-for-word, with references to the transgender and LGBTQ community simply being replaced with "unmasked."

Levine shared her comments in a Twitter thread on Tuesday saying in part, " While these individuals may think they're only expressing displeasure with me, they are hurting the thousands of LGBTQ [Pennsylvanians] who suffer directly from demonstrations of harassment." 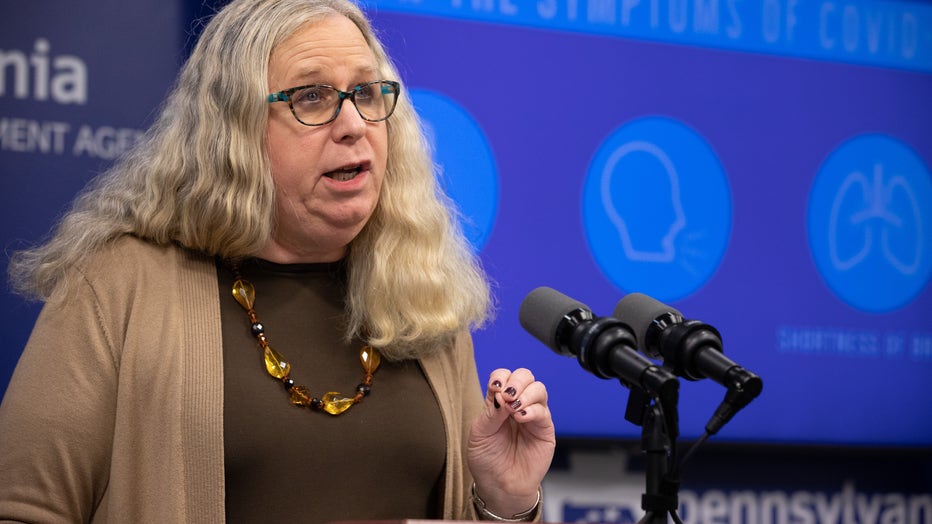 The third paragraph of Diamond's statements mirror Levine's comments above.

"I want to emphasize that these individuals may think they are only expressing their displeasure with me, they are in fact hurting thousands of unmasked Pennsylvanians who suffer directly from these current demonstrations of harassment."

Levine later added, "To perpetrators of these actions, if apologies are sincerely given, then I accept your apologies. An apology is beginning of the conversation. I call on you + all [Pennsylvanians] to work towards spirit of not just tolerance, but acceptance toward LGBTQ individuals."

Diamond's statement included that paragraph, nearly word for word, with the exception of "LGBTQ individuals" being replaced by "unmasked individuals."

“To equate any disrespect for those not wearing masks to the decades of disrespect, threats and violence against our LGBTQ community goes far beyond the hallmarks of a decent society. For these actions to come from a legislator elected to fairly represent all his constituents is simply unforgivable," Wolf stated.

Wolf then called on the Republican House leadership "to introduce a resolution to censure the representative immediately. We need the Republicans to stop spreading misinformation to the general public, and we badly need them to be more responsible and more responsive to the health and wellbeing of all Pennsylvanians."

"This dangerous, reckless behavior is not welcome in Pennsylvania," he added.

“Secretary of Health Rachel Levine made a strong statement in defense of her lifestyle and condemned hatred and intolerance. I, of course, condemn all hatred and intolerance. However, I found it ironic that Levine fails to see that her own policies, and those of the governor, are creating similar hatred and intolerance across Pennsylvania," read part of the statement. “There are plenty of thinking Pennsylvanians who realize that universal masking, in practical application, is not effective in stopping the spread of COVID-19. Those who do also agree that making shopping without a mask socially unacceptable, launching official snitch portals, and threatening jail time are petty attempts to divide the people of this Commonwealth. These are not the hallmarks of a free society, nor a tolerant one."

He went on to call on Wolf to dismiss Dr. Levine as Secretary of Health "for her horrendous performance as the top health official in the state, and her actions to rescue her own mother from the deadly setting of a personal care home without informing the rest of Pennsylvania of the dangers within." Diamond also call on Gov. Wolf to resign.

“Levine may live as she wishes, as I have always firmly believed any American has the right to, including those who desire the freedom to make their own personal safety decisions,” he added.