MONTICELLO, Fla. - A World War II veteran is making his second journey on foot across the country, starting in Georgia and eventually ending in California.

Ernie Andrus began his first cross-country run in October 2013 from San Diego and reached St. Simons Island, Georgia on August 20, 2016, a day after his 93rd birthday.

Andrus said after a couple years of running the same course near his home in Banning, California — he got bored and decided to make the incredible journey again, only this time going the opposite direction.

He left St. Simons Island on March 16, 2019 and plans to average about 13 miles per week. Mission Beach in San Diego is the finish line, which he expects to reach by 2024, the year he turns 100 years old. 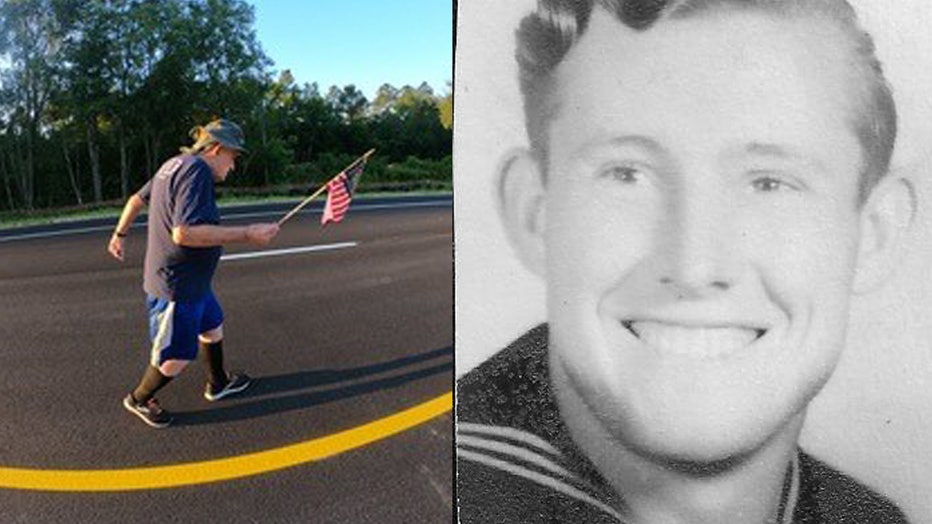 Ernie Andrus, 95, is pictured during his journey from Georgia to California, alongside an image of Andrus while serving as a Navy corpsman in World War II. (Photo credit: John Martin / Ernie Andrus)

On the 4th of July, Andrus will be running through the City of Monticello, Florida.

Martin, a retired fireman from San Bernardino, California, was inspired by Andrus’ first journey and decided to join him for the trip.

Andrus is a former Navy corpsman who served on the USS Rochambeau (AP-63) during the first part of World War II.

“We would take the troops over and bring the wounded back,” Andrus recalled. “I spent whole war in the Pacific. I went back to the South Pacific and the last part of war we did the island hopping, taking it back from the Japanese. My job was to keep the wounded alive.”

Now 95, the veteran is journeying across the country for a second time to raise money for the LST 325 Ship Memorial, a World War II era ship that was used to land equipment and troops on enemy shores. The LST-325 is the last remaining, fully functioning LST — or tank landing ship — in the country.

Andrus was part of the crew of veterans that brought the ship back from Greece to the United States in 2000 and 2001. It’s currently docked in Evansville, Indiana and open to visitors.

“My dream is to take the ship back to Normandy for a D-Day Memorial,” Andrus states on his website. “I didn’t raise near enough money on my first run so I’m trying again.”

Andrus said during his first trip, he averaged about 18.4 miles per week. This time around, he’s doing things a bit slower but still enjoying the journey and meeting people along the way.

“I always say my favorite (state) was Texas but I think that’s because I was in Texas for so long. It took me nine months to get across,” Andrus said. “All through the South the hospitality has been great. The people in the South are very patriotic.”

Interestingly, Andrus said he’s never been one to hydrate with water.

“I’ve never drank water in my life, never been able to swallow the stuff. I do drink carbonated drinks, juices,” he said. “I have one cup of coffee first thing in the morning.”

Andrus said he takes two rest days, usually on Tuesdays and Wednesdays, and this time around has Martin to join him for the trip so he won’t have to do it alone.