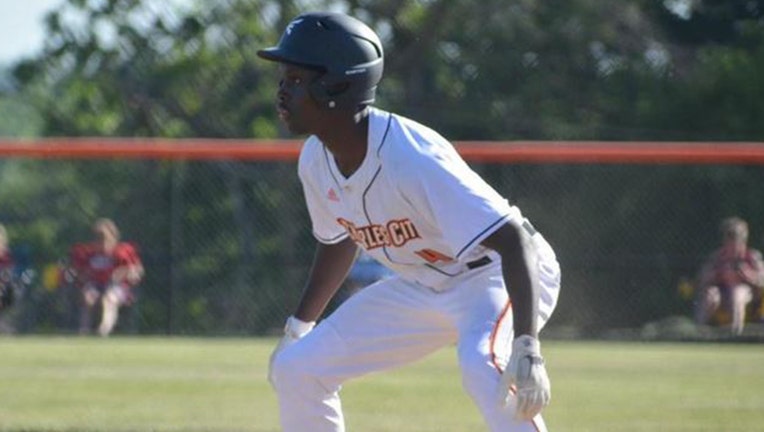 A black baseball player has received an outpouring of support after receiving racist taunts from opposing players during a game. (Credit: Charles City High School)

CHARLES CITY, Iowa - Jeremiah Chapman is a four-sport student-athlete at Charles City High School, but he was ready to give all of that up after hecklers hurled racist taunts at him during a June 27 baseball game.

Chapman, 17, is the lone black player on the varsity baseball squad.

Since the COVID-19 pandemic shortened the season, Saturday’s game at Waverly-Shell Rock High School was a doubleheader.

Chapman said his team lost pretty soundly in the first game, but held a four-run lead in the nightcap when a group of Waverly fands seated in the outfield started heckling Charles City players.

At first, it was typical trash-talking — the kind one would expect to hear at any sporting event. But once Chapman started encouraging his teammates to ignore them, the hecklers directed their ire to him.

He said they started by calling him by his jersey number. But then he heard someone called him Colin, which he took to mean Colin Kaepernick — the former NFL quarterback who famously protested police brutality and racial injustice by kneeling during the national anthem.

“I knew they knew my name because I have lots of friends from Waverly,” Chapman said.

Chapman, who is an outfielder, said he was later told by hecklers to go work in the field, referring to the labor that enslaved Africans once performed.

“That made me really mad because I have never worked in the field a day in my life,” Chapman explained.

The opposing fans then turned their attention away from Chapman and back to the other players. Chapman said he again told his teammates to ignore them, which is when the harshest taunt came his way.

According to Chapman, someone shouted at him that he should have been George Floyd, the black man killed by a Minneapolis police officer who knelt on his neck for nearly nine minutes.

Wallace, a Black driver, had showed support and solidarity with the Black Lives Matter movement.

The incident bears comparisons to the racist remarks that Jackie Robinson endured after breaking MLB's color barrier 73 years ago. But just like Robinson, Chapman maintained his composure.

Once his team got out of the inning, Chapman told his coaches what happened when he got back to the dugout.

His head coach immediately went to speak with the Waverly coach. His assistant coach gave him a hug and reminded Chapman he’d be there for him.

His teammates overheard what happened and got riled up.

Chapman said he contemplated leaving baseball behind after the event, but decided to stick it out.

Before his next at-bat, the umpire approached Chapman and asked if he’d like to have the hecklers thrown out.

Charles City ended up losing the second game as well, but that hardly seemed to matter once the game was over.

Tears filled his eyes as he texted his mom, Keisha M. Cunnings, on the ride home.

“Mom, why are we treated so badly? Like, what did us Black people do? I love you mom,” Chapman’s message read.

Cunnings, who fashions herself as a “mama bear” was hurt to learn what her son had endured. She usually attends every game, cheering her heart out, but had to miss Saturday’s affair.

He’s the oldest of five and Cunnings described him as a “kind and sweet person.”

“He basically just wants the same opportunity as everyone else,” Cunnings explained. “He tries really hard to fit in and be accepted by everybody.”

Cunnings said the incident “cut really, really deep for him” and stole some of the joy sports gave him.

Even so, he has received a ton of support from inside and outside the community.

Other parents have reached out to Chapman and his mom.

J.D. Scholten, a candidate for the U.S. House of Representatives, offered to play catch with Chapman.

Even Eireann Dolan, the wife of Washington Nationals pitcher Sean Doolittle, reached out to offer Cunnings her support. Cunnings said Dolan invited Chapman to give her husband a call.

“Other people I don’t even know are out here supporting me. It really does mean a lot,” Chapman stressed.

The Waverly-Shell Rock Community School District posted a statement on Facebook that acknowledge the racial harassment, calling the remarks “unacceptable.“

Without naming Chapman, the school board issued an apology.

Officials with Charles City’s school district addressed the incident in a message to families, the Charles City Press reported.They called for it to be addressed by Iowa’s high school boys and girls athletic associations.

“We wanted to show our students that we have their backs, that we won’t sweep stuff under the rug,” Superintendent Mike Fisher said, according to the news outlet. “If they feel like that’s happened, we’ve got to do better. We were just going to shine a light on it.”