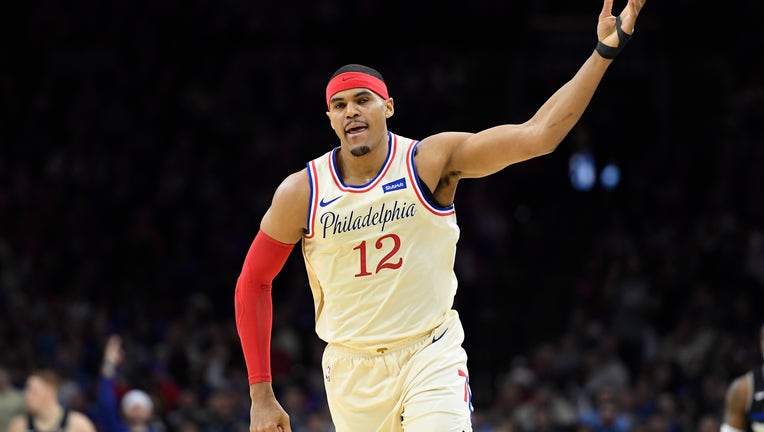 PHILADELPHIA, PENNSYLVANIA - DECEMBER 25: Tobias Harris #12 of the Philadelphia 76ers reacts after making a three-point basket during the first half of the game against the Milwaukee Bucks at Wells Fargo Center on December 25, 2019 in Philadelphia, P

Tobias Harris sank five 3s, Josh Richardson and Furkan Korkmaz each had four and even Embiid hit three as part of Philly's season-high 21 3s (on 44 attempts) against a Bucks team that had the best record in the NBA.

Harris and Al Horford hit 3s over the final 90 seconds to push back a late Bucks' run, and the Sixers improved to 16-2 at home.

There was a charged atmosphere for the anticipated matchup featuring Embiid and Ben Simmons taking on Khris Middleton and Antetokounmpo. Fans dressed as elves, wore ugly sweaters and held signs that said all they wanted for Christmas was a Sixers win.

They got it, with Embiid using the national showcase to play like an MVP in a dominant first half that helped the Sixers take the biggest halftime lead (21 points) against the Bucks under coach Mike Budenholzer.

Embiid scored 23 points and was disruptive defensively, holding Antetokounmpo to 4-for-14 shooting in the half. The Sixers hit 11 3s in the half and made the NBA-best Bucks (27-5) look like anything but Eastern Conference contenders. Embiid stood firm under the basket, arms extended sky high on one Antetokounmpo drive in transition. Embiid absorbed the contact and the "Greek Freak" lost control of the ball, one of six Milwaukee turnovers at the break.

76ers coach Brett Brown said before the game the Bucks were "NBA royalty."

They have a ways to go before they're crowned tops in the East.

With fans chanting "Trust the Process!" on Embiid free throws, the All-Star center was worthy of the holiday highlight video.

"I reminded our team, people in America have more appreciation for this day in the NBA," Brown said. "We're grateful for the opportunity."

The Sixers aced their test against the NBA's best.

"I'm not going to overvalue one game," 76ers general manager Elton Brand said, "but it's a good barometer."

It wasn't just Embiid that flustered the Bucks. Korkmaz was knocked on his rear and buried Philly's 16th 3 of the game late in the third for a 93-67 lead that had the crowd going wild. Korkmaz's shot capped a string of 3s on five straight Sixers baskets. Mike Scott, the reserve better known for his man-of-the-people popup appearances, became the seventh Sixer to hit a 3 for a 98-70 lead. The 76ers led 100-73 through three.

Brand held a state-of-the-franchise press conference before the game and preached chemistry and continuity would eventually get the Sixers among the best in the East, a conference many pundits picked them to win.

"We are going to get there," Brand said. "Home-court advantage is important but having Joel healthy in the playoff in May, June, that is important to us. We could still grow into a team that could be a No. 1 seed."

For a game, the 76ers sure played like one.

Bucks: The Bucks trailed by 29 and held only an early three-point lead.

76ers: Embiid had his seventh game this season with 30 points and 10 rebounds. He scored 20 points before halftime for the second time this season. ... Simmons had 15 points and 14 assists.

Bucks guard Donte DiVincenzo admired the 2016 and 2018 Villanova national championship banners that hang in the rafters. The former Wildcats star was named Final Four Most Outstanding Player in the '18 title run.

"There's two of them things. That's tough," he said.

"I always look at opportunities to improve the team. That is my job to make sure Brett and the group have the pieces to compete for a championship. Right now, I am definitely encouraged," Brand said.