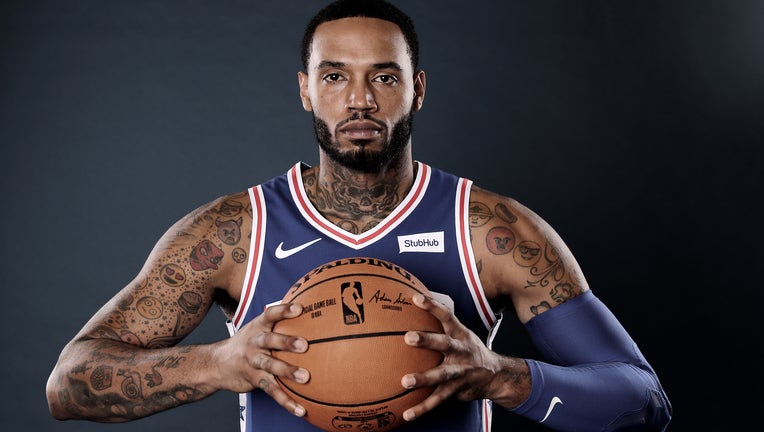 Mike Scott #1 of the Philadelphia 76ers poses for a portrait during Media Day at 76ers Training Complex on September 30, 2019 in Camden, New Jersey. (Photo by Elsa/Getty Images)

CAMDEN, N.J. - Mike Scott would rather party with 76ers fans at an NBA championship parade than scuffle with Eagles fans at a stadium parking lot.

Scott has fashioned himself a Philly folk hero since he was acquired in a February trade: he’s scooped ice cream, crashed a wedding, snapped selfies, engaged with fans on Twitter and inspired his cult “Hive” fan club to get tattooed.

Scott found one fan event that wasn’t so friendly when the Virginia native showed up earlier this month wearing a Redskins jersey to an Eagles tailgate before a game against Washington. Scott was caught on tape throwing a punch at a fan from a group of Eagles supporters the Sixers forward said used slurs to stir him up.

Scott said he should have walked away from the fight.

“I definitely have to be the bigger person and it should have never got to that point,” he said. “I definitely should have walked away. I didn’t. He was talking crazy and took it to the next level so I had to see if he’d match that energy. Y’all saw what happened with the rest of it.”

Scott insisted he held no hard feelings against Philadelphia sports fans. He used social media for the reminder of the Eagles game and gave no indication any incident had happened. Scott met with 76ers general manager Elton Brand and members of the team’s security staff but was not punished.

“I’m not stupid, that doesn’t represent everyone,” Scott said. “I still had a ball. I still had fun, took pictures with fans, throwing balls in the parking lot and I enjoyed the game.”

The 31-year-old Scott has more chances to become the talk of the town — for the right reasons — after he signed a $9.8 million, two-year deal in the summer. Scott, who peppered his light-hearted session with profanities, laughed off the parking lot fight.

Says Scott, “It’s Philly. We had a brawl before noon.”

Other things of note from 76ers media day.

The 76ers guard has long been criticized for his reluctance to shoot the long ball. He’s missed all 17 3s in his two seasons with the Sixers and his poor outside shooting has been the only thing holding him back from becoming one of the top stars in the NBA.

Simmons, the No. 1 overall draft pick in the 2016 draft, said he doesn’t need 3s to become one of the top stars in the game.