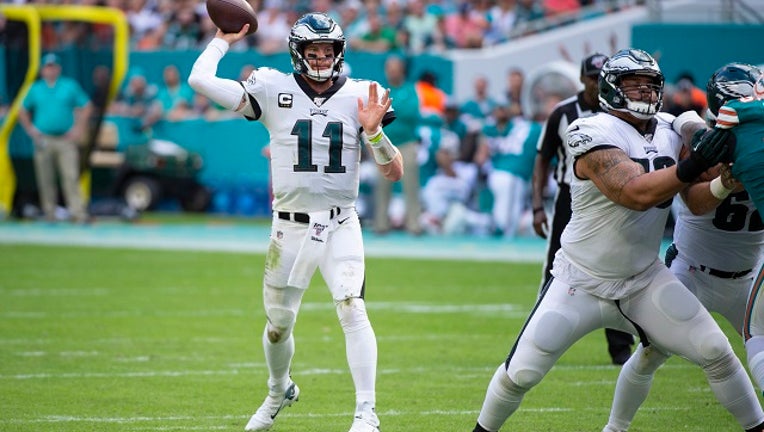 Philadelphia Eagles Quarterback Carson Wentz throws the ball during the NFL game between the Philadelphia Eagles and the Miami Dolphins at the Hard Rock Stadium in Miami Gardens, Florida on December 1, 2019. ((Photo by Doug Murray/Icon Sportswire via Getty Images))

Miami overcame a 14-point deficit in the second half with three touchdowns in less than 13 minutes -- a remarkable achievement for one of the NFL's lowest-scoring teams.

The Dolphins (3-9) won for the third time in their past five games, a surprising and perhaps costly turnaround for a team that will be shopping for a franchise quarterback in the 2020 draft.

The Eagles (5-7) lost their third game in a row and missed a chance to pull into a tie with Dallas atop the NFC East.

Trickery helped the Dolphins, who twice opted not to kick on fourth down and instead threw for a touchdown. The second such gamble by rookie coach Brian Flores paid off when Miami shifted out of field goal formation before holder Matt Haack threw a 1-yard pass to Sanders.

Parker did much of the rest. He finished with seven receptions for a career-high 159 yards and two scores, both on leaping grabs.

Parker jumped again to make a 34-yard catch that set up the score that put the Dolphins ahead to stay with 11 minutes left.

Tight end Mike Gesicki also got into the act with a leaping 14-yard touchdown catch. Ryan Fitzpatrick's surehanded targets helped him finish 27 for 39 for 365 yards and three touchdowns as Miami achieved season highs in points and yards (408).

Sanders returned to his usual role to kick a 51-yard field goal with 3:37 left that made the score 37-28. The Eagles kicked a field goal with 1:51 left and got the ball back, but Carson Wentz's desperation pass from midfield on the final play was intercepted in the end zone.

Wentz threw for three touchdowns to help build a 28-14 lead, but the Eagles were kept out of the end zone over the final 26 minutes. That quieted the thousands of green-clad spectators rooting for the visitors, who likely outnumbered Dolphins fans.

Philadelphia was expecting a field goal try when Haack stood and instead took a shotgun snap, with four teammates flanked far to the left and five far to the right.

Haack ran to his left before flipping a fluttery pass to Sanders, who was part of the group on the left before slipping into the end zone uncovered.

Flores opted not to punt on fourth and 4 in the first quarter, and instead Parker scored on an eye-popping 43-yard catch and run.

Dolphins running back Kalen Ballage left in the second quarter with a left leg injury and didn't return.

Linebacker Nigel Bradham was evaluated for a head injury and cleared to return.

Eagles: play host to the Giants on Monday, Nov. 9. The Eagles have won five in a row in the series and face the Giants again in the final game of the regular season.