Meet the women who make Bucs most diverse in NFL

TAMPA, Fla. - Maral Javadifar thought Katie Sowers making history a year ago as the first female to coach in a Super Bowl meant that topic had been handled once and for all.

Thanks to Tampa Bay coach Bruce Arians, there are twice as many women to help with the ensuing media attention.

"I think that door needed to be opened they're great teachers they work their tails off and they more than qualified," said head coach Bruce Arians.

Javadifar, assistant strength and conditioning coach, and assistant defensive line coach Lori Locust follow in Sowers’ footsteps with the Bucs the only NFL team with two female coaches this season.

"I do look forward to the day that it’s no longer newsworthy to be a woman working in the pros or making the Super Bowl for that matter," Javadifar said Monday. "And, you know, I hope we get to a point where all people are afforded equal opportunities to work in professional sports because there are a lot of great qualified coaches out there." 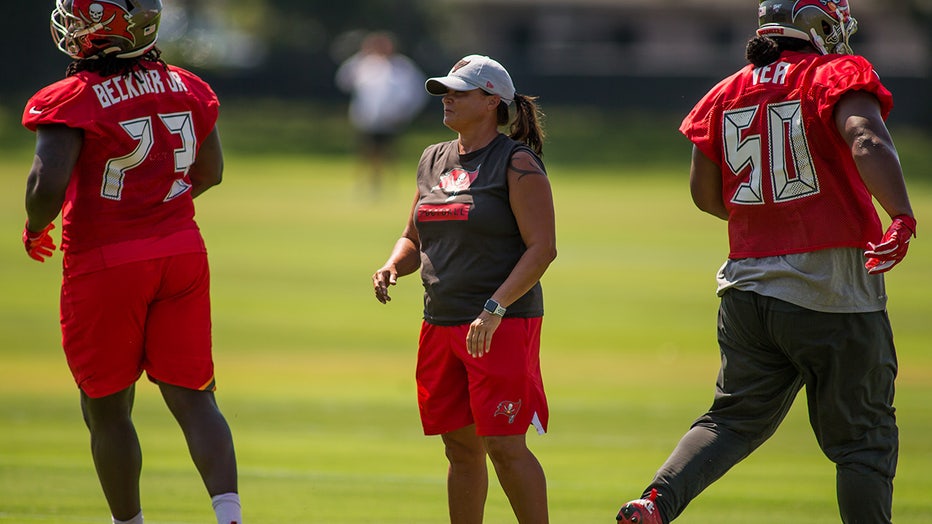 Assistant Defensive Line Coach Lori Locust looks on during OTA's with the Tampa Bay Buccaneers at the AdventHealth Training Center at One Buccaneer Place on May 28, 2019, in Tampa, Florida. (Photo by Mary Holt/Icon Sportswire via Getty Images)

Locust said she and Javadifar have only one goal, and that’s helping Tampa Bay beat Kansas City in the Super Bowl on Sunday.

"It wouldn’t matter if we were second in or 273rd," Locust said. "And I mean, like we acknowledge the fact there hasn’t been many before us, but it’s not anything that we kind of keep in the forefront of what we do on a daily basis."

Locust and Javadifar won’t be the only women to have an impact on this Super Bowl.

Down judge Sarah Thomas will be the first female to officiate a Super Bowl. The Chiefs have a pair of female assistant athletic trainers in Julie Frymyer and Tiffany Morton. The Bucs also have Carly Helfand as a scouting assistant with Jackie Davidson in the front office as director of football research.

Even Brady has lessons to learn from QB coach Christensen

Tampa Bay Buccaneers Quarterbacks Coach Clyde Christensen is so gracious in his leadership, he should be known as Clyde the Guide.

Kansas City running back Clyde Edwards-Helaire said seeing women coaching in this game means a lot to him with his younger sister having muscular dystrophy.

"To me, it is a spark to my eyes," Edwards-Helaire said. "I can talk to my little sister and she sees me play and now we talk about what is going on ... and she could be a positive light to the NFL and to the football community, I am excited about it."

Arians, who had the first female coaching intern in 2015 with Jen Welter in Arizona, said hiring Locust and Javadifar was a choice to open a door for great teachers. Arians said they "worked their tails off" and are more than qualified.

"Inclusivity and diversity are great ways to teach," Arians said. "I mean, the more input from different types of voices, the better output you get."

Bucs defensive line coach Kacy Rogers said Coach Lo has the thick skin needed for the joking among men playing in the trenches. Bucs defensive end Shaq Barrett loves how Locust is always giving him tips. She coached against Barrett’s brother in semi-pro ball in Baltimore where she was a training camp intern with the NFL’s Ravens in 2018.

"It’s a blessing to have her on our team and have her coaching in the Super Bowl," Barrett said.

Locust cautions against thinking she and coaches such as Jennifer King, the first Black female assistant in the NFL hired last week as Washington’s running backs coach, simply sprung overnight.

"There’s hundreds of women that are at various levels of football, whether in high school or college semi-pro," Locust said. "And they’ve been out there kind of doing it on their own, and they’ve been earning those positions on their own without any help from anyone else."

Coaching football wasn’t an option for women when Locust grew up in Harrisburg, Pennsylvania, loving to watch the Pittsburgh Steelers and linebacker Jack Lambert. After going to Temple for college, she married, had two sons and sold insurance.

Around the age of 40, Locust started playing defensive lineman in a women’s league until injuries led her to coaching her former teammates. She took a job at her alma mater, Susquehanna Township High, as an assistant working nine years without being paid.

"Did everything that I could to learn there, did every job that sometimes the guys maybe didn’t want to do because I knew that it would help kind of round out my experience as a coach," Locust said.

Locust also coached in semi-pro leagues, a women’s league and youth leagues. She attended the NFL’s annual Women’s Careers in Football Forum in 2017 and again in 2018. Arians hired her just as the Alliance of American Football folded, ending her gig as assistant defensive line coach in Birmingham.

A native of Queens, New York, Javadifar played college basketball inspired by her mother who couldn’t even watch sports growing up in Iran. A torn ACL before she got to Pace University helped steer her into physical therapy.

Despite being in his 40s, Tom Brady is still at the top of his game after decades in the game.

Anthony Piroli sought out Javadifar, wanting to add an assistant strength and conditioning coach who also is a physical therapist to the Bucs’ staff. Javadifar didn’t meet Arians until her interview.

"His first question was, ‘What can you bring to the table?’" Javadifar recalled. "And, you know, I had laid it out there, and it was pretty seamless."

Both Locust and Javadifar hope the Bucs’ success leads to more opportunities for people who look like them. Only two of the NFL’s seven head coaching jobs went to minorities in the latest hiring spree.

"Obviously, it’s working, and hopefully it’ll set an example for the rest of the league to kind of take notice and stop, you know, being maybe so narrow in their candidate search," Locust said.

FOX 13 News contributed to this report.