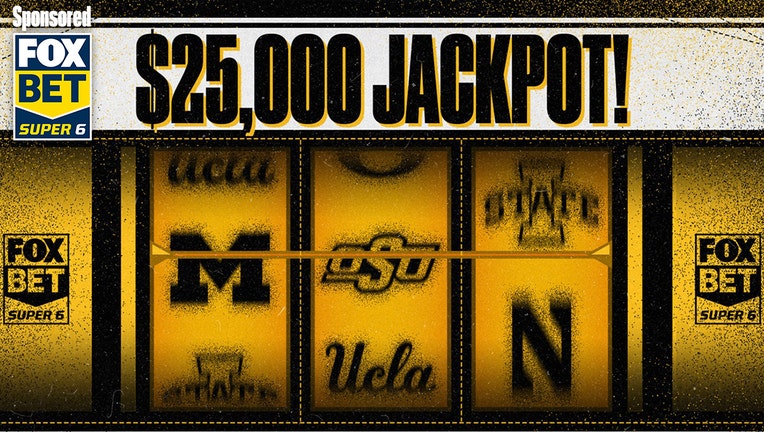 Any weekend in college football can be a great weekend.

While this weekend is one of those rare ones on the schedule in which the Top 25 matchups are fleeting — in fact, there is not one this week — the games with upset potential are certainly there.

Iowa State-Oklahoma State, Oregon-UCLA and USC-Notre Dame this weekend all hold the possibility for season-shaking upsets that could trip up the College Football Playoff chase.

Also, Saturday brings another chance to win with FOX Bet Super 6. Pick the winners of all six marquee games with their margins of victory, and you could win the grand prize of $25,000. It’s fast, and it’s free, and all it takes is downloading the FOX Bet Super 6 app on your phone or mobile device.

Here is a look at Saturday’s games.

In a normal year, you would take Pat Fitzgerald’s crew as a good bet to pull a major upset along the way. But then you remember that this Wildcats squad got crunched by Nebraska and Duke on the road. And while Michigan certainly had a scare at Nebraska in its own right, there are a number of good signs for the Wolverines. Chief among them: a defense that allows only 15.5 points per game and 119.3 yards per game.

The most unnoticed undefeated team in the history of college football, Oklahoma State has won three straight games against ranked teams (at Texas, Baylor, Kansas State) and is allowing only 19.5 points per game in a conference in which everybody scores. What’s the reward? A trip to Iowa State, where Breece Hall and Brock Purdy are getting the Cyclones firing again. Iowa State is an unranked team that’s a touchdown favorite against an undefeated, top-10 team. Either there’s a major disrespect factor or somebody knows something the rest of us don't.

May the best Cougars win. BYU has dropped two straight after a 5-0 start, falling to Boise State at home and Baylor on the road. Perhaps the independent schedule is taking its toll. Meanwhile, Wazzu has won three straight, including home wins against Stanford and Oregon State in back-to-back weeks. Washington State QB Jayden de Laura has been impressive, with almost 1,500 yards passing, 15 touchdowns and just five interceptions.

Oregon hopes this is its only trip to the Rose Bowl this year. If the Ducks run the table and win the Pac-12, there’s a chance they could get one of the last spots in the College Football Playoff. But to keep that dream alive, the Ducks' defense needs to make sure Dorian Thompson-Robinson and Zach Charbonnet don’t both post big numbers for the UCLA offense. On paper, this looks like the weekend’s best game and a chance for Chip Kelly’s team to make a statement about changing fortunes in the Pac-12.

It's an eventful week for both schools. A wild win over Florida in the Swamp was the prelude to the announcement that Ed Orgeron will be leaving at the end of the season — just two years after earning King of Louisiana status. Meanwhile, Lane Kiffin and the Rebels survived a madhouse in Knoxville to down Tennessee in a game that showed how gritty and tough Matt Corral really is. Talent-wise, the Rebels are better, something that won’t sit well in the Bayou.

After a pandemic-forced hiatus last year, the longest intersectional rivalry in the country is back. Lately, this has been a bit one-sided, as Notre Dame has won three straight, and the Trojans have not won in South Bend since 2011 (a span of four games). It seems like these two programs are in different places, even in a year when the Irish’s quarterback and offensive line situations are in flux. Notre Dame’s win-ugly philosophy has been effective and should carry another week.

Download the FOX Bet Super 6 app now to predict the outcomes of the biggest events in sports, and you could win thousands of dollars absolutely for free each and every week. Just download and play!