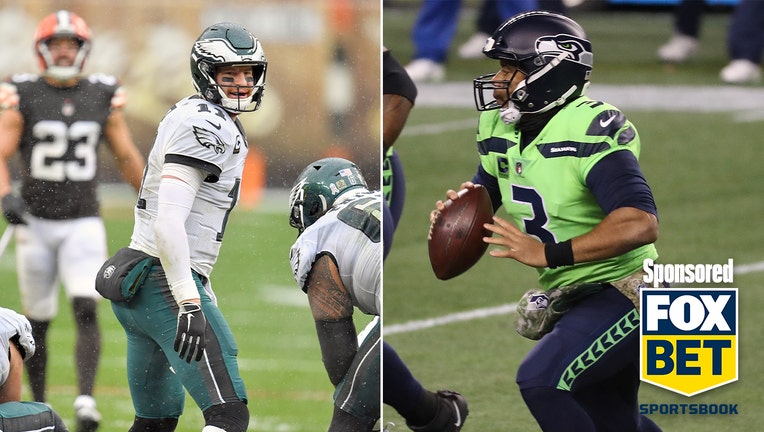 LEFT: Quarterback Carson Wentz #11 of the Philadelphia Eagles talks to a teammate from the line of scrimmage during the first half against the Cleveland Browns at FirstEnergy Stadium on November 22, 2020 in Cleveland, Ohio. (Photo by Jason Miller/Get

The marquee NFL teams often can focus on the positive storylines like having an MVP candidate who is carrying his team to a potential Super Bowl run.

The mediocre teams? Their drama is set on the long term. Like why the franchise quarterback is falling apart and how you can go from Super Bowl champions to playoff pretender in three seasons flat.

In this case, the marquee team is the Seattle Seahawks, a squad with a quarterback in Russell Wilson that is able to overcome his team’s flaws. And the mediocre one is the Philadelphia Eagles, whose biggest flaw might be quarterback Carson Wentz at this time.

Those two will end Thanksgiving weekend on Monday night at empty Lincoln Financial Field (8:15 p.m., ESPN) with the Seahawks trying to hold the lead in the talented NFC West and the Eagles trying to regain a ½ game cushion in the laughable NFC East.

The history
This series has become a nightmare for Philadelphia. While Seattle’s overall lead is 11-7, the Seahawks have won six straight including two games in 2019- one in the regular season  and the NFC Wild Card game which Wentz was knocked out of early in the first quarter. (Both games in 2019 ended with 17-9 Seattle wins.)

The Eagles last win against the Seahawks came in 2008- a 26-7 victory in Seattle. The last time they beat Seattle in Philadelphia was a 31-7 victory over the Seahawks in 1989. More recently, Wilson has won five straight against the Eagles dating back to 2014. Add this all together and it isn’t pretty for the home team.

The storylines to watch
Normally, the Seahawks are the main story. After all, they are a legitimate contender for the NFC’s bid to the Super Bowl with an MVP candidate at quarterback. But the Eagles are in a place right now where the drama is dripping around Wentz, who was an MVP in waiting back during Philadelphia’s Super Bowl season in 2017 and who has crashed and burned this year. The Eagles are 3-6-1 and a half game behind Washington and perhaps the New York Giants – depending on their game on Sunday. Philadelphia has a road trip looming in Green Bay next week and follows that with games against New Orleans and a trip to Arizona. If Wentz doesn’t turn it around, Philadelphia will fade out of contention and the futures of him, head coach Doug Pederson and general manager Howie Roseman will come under serious debate. That’s why this is a must-win for the Eagles.

Seattle is tied with the Rams and had 11 days to get ready for this one after avenging a loss to the Cardinals last Thursday night. One of the players who could be extra motivated in this one would be D.K. Metcalf, who was passed over by the Eagles in the 2019 draft when they were looking for a wide receiver. He had a standout game in the wild-card win, including the game-sealing 53 yard touchdown in the third quarter. The Seattle defense played well against Arizona last week, but continues to post struggling numbers against the pass. This could be a good spot for them to continue to get healthy.