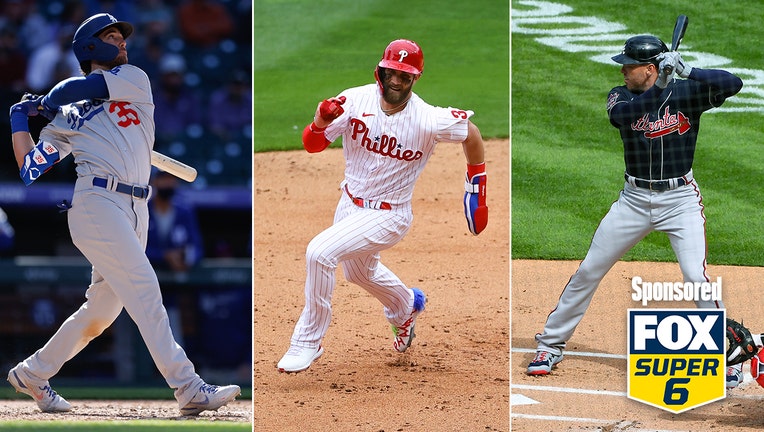 It’s like an old friend coming back to spend the summer with you. That comfortable pair of slippers to wear around the house. The song on the radio that makes you feel good just in the first few notes.

Baseball is back, and we have the joy of knowing that it is going to be there every day until the leaves fall off the trees and the night gets that autumnal chill.

After a wild Opening Day, FOX will begin its baseball lineup on FS1 Saturday afternoon with a doubleheader, starting with the Atlanta Braves and Philadelphia Phillies in Philly at 4 p.m. ET, then wrapping up with the defending World Series champion Los Angeles Dodgers heading to Coors Field to face Charlie Blackmon and the Colorado Rockies at 8 p.m. ET.

That gives you two chances to win the $5,000 grand prize on each game with FOX Super 6! Just download the FOX Super 6 app on your mobile phone or tablet, answer six questions about each game, then sit back and watch America's pastime on FS1. Best of all? It's absolutely free to play and win.

So what should you be watching for in each game? Here’s a little glimpse.

On paper, the National League East is the only division in which all five teams have legitimate aspirations of reaching playing in October.

It’s easy to forget that Freddie Freeman, Ronald Acuna Jr. and the Braves were one win away from advancing to the World Series for the first time since 1999 last year and not the Dodgers. Atlanta’s lineup is deep from top to bottom, and the bullpen was fourth in the majors during the 2020 season in ERA at 3.50. However, the Braves allowed teams to get chances late in games, as opponents had a .236 batting average against Atlanta’s bullpen, which was 17th overall in the sport.

Will Smith takes over the closer spot from Mark Melancon, and he could be especially tough Saturday on Philadelphia’s biggest threat – Bryce Harper. After a showdown between the two on Thursday’s opener, Smith has held Harper to 0-for-11 with six strikeouts.

The biggest question for the Braves is their starting rotation. To bolster that potential weakness, they added Charlie Morton from the American League champion Tampa Bay Rays. Morton will get the start on Saturday for Atlanta.

Meanwhile, the Phillies' bullpen cost them a playoff spot last year by being historically awful. Philadelphia’s bullpen ERA was 7.06 last year – the worst in the sport since the 1930 Phillies posted an 8.01. Teams hit .315 against the Philadelphia bullpen in 2020 with a WHIP of 1.79 – both of which were the worst in baseball by several percentage points over the 29th ranked team in Colorado.

Still, the Phillies are built on offense with Harper, the newly re-signed J.T. Realmuto, veteran Didi Gregorius, young star Alec Bohm and Rhys Hoskins all anchoring the middle of the lineup. The Phillies will go as far as their bats and trio of rotation heading stars of Aaron Nola, Zack Wheeler (Saturday’s pitcher) and Zach Eflin take them.

Thirty-two years of frustration faded in a season for the Dodger blue tops last October. After knocking on the door consistently for the better part of the past 15 years, Los Angeles finally had its crowning moment when it downed the Rays and won the World Series for the first time since 1988.

However, the Dodgers may find that uneasy is the head that wears the crown. There hasn’t been a back-to-back World Series winner since the 2000 Yankees wrapped up a three-peat. A National League team hasn't gone back to back since the 1975-76 Cincinnati Reds did it. There have been seven different World Series champions dating back to 2014.

Still, Los Angeles has made its push. Trevor Bauer has moved into the second rotation spot behind Clayton Kershaw, forming a top three (Kershaw, Bauer, Walker Buehler) that may be unmatched. The lineup is deep with Max Muncy, Justin Turner, Corey Seager, AJ Pollock, Cody Bellinger and perhaps the best player in the game in Mookie Betts all giving pop and versatility.

What makes the Dodgers so dangerous is they are so good in clutch spots. Last year, they had an .883 On Base/Slugging percentage in "Late and Close" games with 15 homers, 43 RBIs and 51 hits – all among the best in the sport.

On the flip side, the Rockies are considered in full rebuilding mode. Gone is Nolan Arenado, who was traded to the St. Louis Cardinals over the winter. Shortstop Trevor Story could be shipped out at the trade deadline as well. In a division filled with two hulking behemoths in the Dodgers and San Diego Padres, the Rockies could be in scrambling to survive mode.

Still, there is some offense. Story is a guy who flies well under the radar. Charlie Blackmon has been one of those players who is just solid at the top of any order. And in Coors, there are going to be lofty offensive numbers put up.