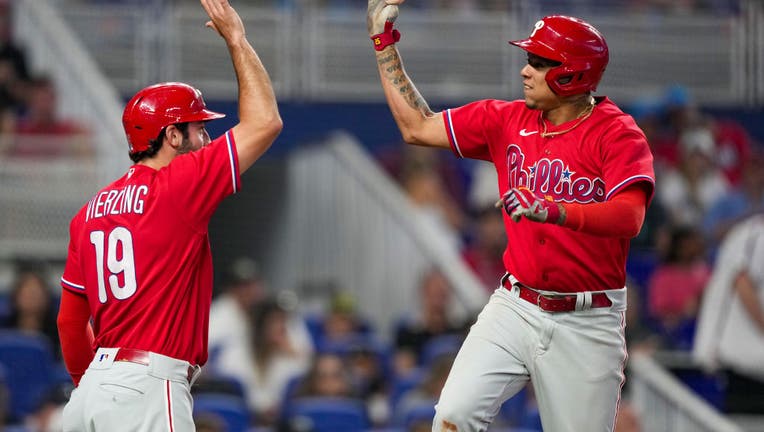 MIAMI - Aaron Nola struck out 10 and pitched scoreless ball into the ninth inning as the Philadelphia Phillies beat the Miami Marlins 4-0 Sunday for a three-game sweep.

Yairo Muñoz homered to help Philadelphia head into the All-Star break at 49-43. Even minus injured star Bryce Harper, the Phillies showed a dramatic turnaround after manager Joe Girardi was fired on June 3, going 27-14 under Rob Thomson.

Nola (6-7) gave up four hits and walked one. He was pulled after allowing one-out singles to Joey Wendle and Brian Anderson in the ninth.

José Alvarado relieved and struck out Garrett Cooper and retired Bryan De La Cruz on a grounder for his first save. The Phillies shut out Miami in the final 25 innings of the series.

Nola extended his string of starts of at least seven innings to eight, the second-longest active streak in the major leagues behind Miami ace Sandy Alcantara, who has 13.

The Marlins scored one run in the series. They have not homered in eight games, the second-longest drought in club history — Miami teams in 1993 and 2019 failed to go deep in nine straight games.

The Phillies scored all their runs in the fourth. Alec Bohm and Matt Vierling had consecutive RBI doubles and Muñoz hit a two-run homer. Muñoz drove the first pitch from Trevor Rogers (4-9) over the wall in left for his third homer.

IMPROVEMENTS AT THE BREAK

The Phillies were 44-44 at the All-Star break last year. They haven't had Harper, the reigning the NL MVP, since his thumb was broken by a pitch from San Diego's Blake Snell on June 25.

Phillies: RHP Zach Eflin (right knee bruise) will not throw in a simulated game during the break after experiencing soreness Sunday. He will be re-evaluated Monday in Philadelphia. ...RHP Sam Coonrod (right shoulder bruise) will go on a rehab assignment after the All-Star break.

Phillies: RHP Kyle Gibson (5-3, 4.35) will start the opener of a three-game home series against the Chicago Cubs on Friday.

Marlins: Have not announced the starter for its home game against Texas on Thursday.