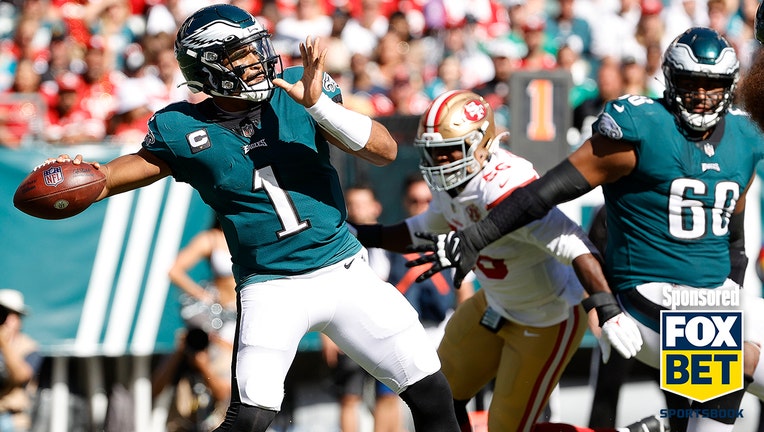 Jalen Hurts of the Philadelphia Eagles passes against the San Francisco 49ers at Lincoln Financial Field on September 19, 2021 in Philadelphia, Pennsylvania. (Photo by Tim Nwachukwu/Getty Images)

One of the best rivalries in the NFL takes center stage on Monday Night Football, as the Philadelphia Eagles face the Dallas Cowboys. Both teams come into this matchup with 1-1 records.

Philadelphia looks to bounce back after a poor showing in a Week 2 loss to the San Francisco 49ers. Look for the Eagles to rely heavily on quarterback Jalen Hurts to put up points and keep up with this high-octane Cowboys offense.

Dallas heads into this divisional showdown with some confidence. The Cowboys kept things close against the Tampa Bay Buccaneers in the season opener, before beating a strong upstart Los Angeles Chargers team on the road in Week 2. Now America's Team gets to play at home with a chance to take the lead in the NFC East.

When it comes to betting, there are multiple ways to wager on tonight's big game, but let's focus on prop bets. Prop bets — also known as proposition bets — are becoming more and more popular with every passing football season, mostly because they are easy to wager on.

Prop bets are wagers that are not directly tied to the final score or final outcome. Almost anything other than the moneyline, point spread, and total can be considered a prop bet.

Let's jump into a couple of our favorite ones for tonight, with odds courtesy of FOX Bet.

Pick via FOX Sports Betting Analyst Jason McIntyre: "Give me all your Jalen hurts props. Last year the young quarterback had 342 passing yards, 69 rushing yards, and 1 touchdown in his first start against the Cowboys.

"In this game, taking the over on passing yards and rushing yards should be safe bets considering how bad the Dallas defense is."

"Last year the Cowboys fared poorly against running QBs (Kyler Murray, Daniel Jones, and of course Russell Wilson and Lamar Jackson). I'll toss in the OVER 1.5 passing touchdowns in a game like this with a high total."