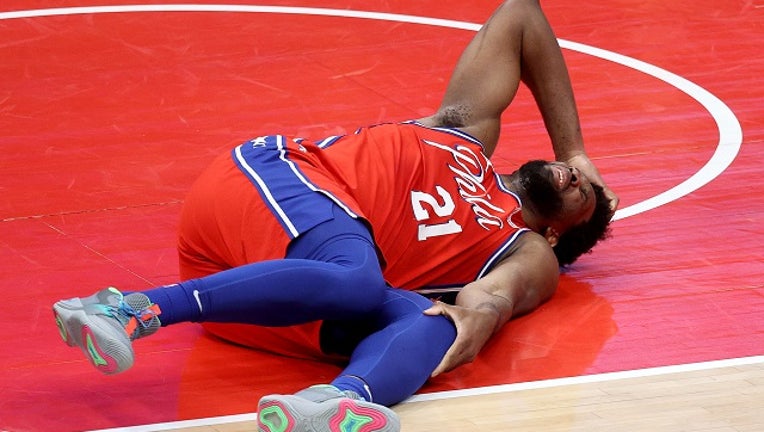 WASHINGTON - Joel Embiid scored 23 points but sustained an apparent leg injury and left midway through the third quarter in the Philadelphia 76ers’ 127-101 victory over the Washington Wizards on Friday night.

Embiid, an MVP contender for the Eastern Conference-leading 76erss, was in his first game back following a week-long absence for contract tracing. He entered Friday averaging 30.2 points and 11.6 rebounds.

He had also had seven rebounds before his departure with 6:20 left in the third.

Following a dunk for his last points, Embiid landed awkwardly on his left leg, his knee joint appearing to bend slightly forward. He laid on the floor for several minutes, and a stretcher was briefly brought onto the court, but the center eventually limped off under his own power.

Even with Embiid’s exit and Ben Simmons also out for contact tracing after both players were exposed to the same barber who tested positive for COVID-19, the 76ers cruised to a second straight comfortable win following the All-Star break.

Shake Milton scored 18 points off the bench Philadelphia. Furkan Korkmaz added 12 of his 18 points in the fourth quarter as the Sixers completed a three-game season sweep of the Wizards.

Memphis had a chance to take the lead with about three seconds remaining when guard Ja Morant went to the rim against Jokic but came up short against the Denver center. The Nuggets then ran out the clock for their fifth straight victory.

Will Barton and Michael Porter Jr. had 21 points each for Denver. Jamal Murray was held to a season-low three points, missing 13 of 14 shots.

Brandon Clarke and Dillon Brooks led Memphis with 20 points each. Morant had 16 points — on 5-of-16 shooting — and nine assists, and Jonas Valanciunas added 14 points and 11 rebounds.

Ingram played just 25 minutes and Williamson 18 because of how lopsided the game became. Steven Adams had 10 points and 17 rebounds in his 21 minutes on the court.

The Cavs welcomed forwards Kevin Love and Larry Nance Jr. back to the starting lineup after extended absences, and both announced their returns with early 3s. But their roles were relatively limited and did not significantly influence the result of a match-up with a Pelicans squad that looked inspired and determined to bounce back from an embarrassing 30-point loss to Minnesota a night earlier.

Love, who had missed 33 games since injuring his right calf in late December, played 10 minutes and had four points and a rebound. Nance, who missed 12 games after injuring his left hand, had 11 points, four rebounds and a block in 28 minutes. Collin Sexton had 19 points.