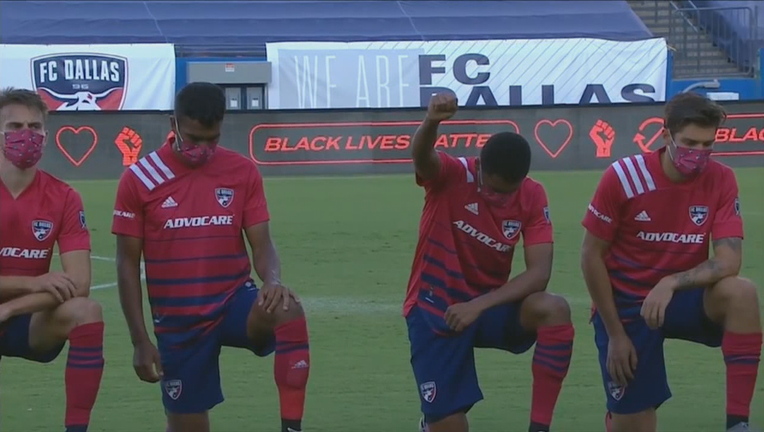 FRISCO, Texas - FC Dallas got its season back underway Wednesday night at home in Frisco. But it was disrupted by fans who booed the players for kneeling during the national anthem.

It was the first FC Dallas home game in front of fans since the coronavirus pandemic halted the pro soccer season back in March.

When all of Dallas and Nashville's players kneeled to protest racial injustice, several of the 2,000 or so fans in the stands booed the players.

Dallas defender Reggie Cannon, who also plays for the U.S. National Team, was furious when asked about the booing after the game.

"Ryan Hollingshead, the first thing he said to me after we got up from the knee he said, 'I'm sorry for our fans.' Because we had some chanting USA when they don't understand what kneeling means. They don't understand why we're kneeling. They can't see the reason. They just think we're the ignorant ones and it's incredibly frustrating. And I'm sorry to have to this tone but you have to call it for what it is. I even know when we decided to kneel I knew it was going to happen. That should tell you guys something. I knew we were going to have some negative pushback from having a unified response over what's going on. That's the problem. That's the problem. It hurts me because I love our fans. I love this club and I want to see the support that the league has given us, that everyone has given us from our fans," Cannon said.

MLS did not play the national anthem during the recent season kick-off tournament but brought it back once fans were allowed back into the stadium.

Cannon said the players had asked that it not be played before the game because they didn't feel it was right "for the anthem to be played in this moment."