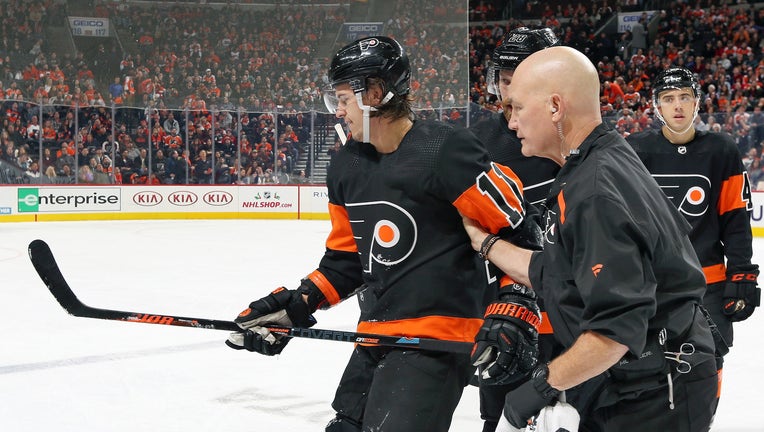 Travis Konecny #11 of the Philadelphia Flyers is helped off the ice by the teams Director of Sports Medicine Jim McCrossin following a center ice collision with Mark Borowiecki #74 (not pictured) of the Ottawa Senators on December 7, 2019 at the Well

PHILADELPHIA - Philadelphia Flyers forward Travis Konecny is out indefinitely after suffering a concussion during Saturday’s game against the Ottawa Senators.

Konecny left the game a did not return after a hard, open-ice hit by Mark Borowiecki late in the first period.  Flyers coach Alain Vigneault previously called the injury an upper-body injury.

Borowiecki entered the game third in the NHL with 115 hits, and he caught an unsuspecting Konecny with a hard check with 2:22 left in the first. No penalty was called on the hit.

The game got physical after that, with Philadelphia’s Jakub Voracek fighting Nick Paul in a one-sided affair won by Paul. Less than 15 seconds into the second, Laughton sent Ottawa’s Jean-Gabriel Pageau to the ice with a hard hit of his own. Pageau got up and then fought Flyers rookie Joel Farabee to a draw.

The Flyers were able to come away with a 4-3 victory.

“He’s been our best scorer and he’s found a way to contribute offensively and defensively. We were using him five-on-five and the PP. It’s going to give the opportunity to someone else to see more ice time and step up and contribute,” Vigneault said of Konecny’s indefinite absence Monday.

The Flyers will be back on the ice Wednesday when they take on the Colorado Avalanche.