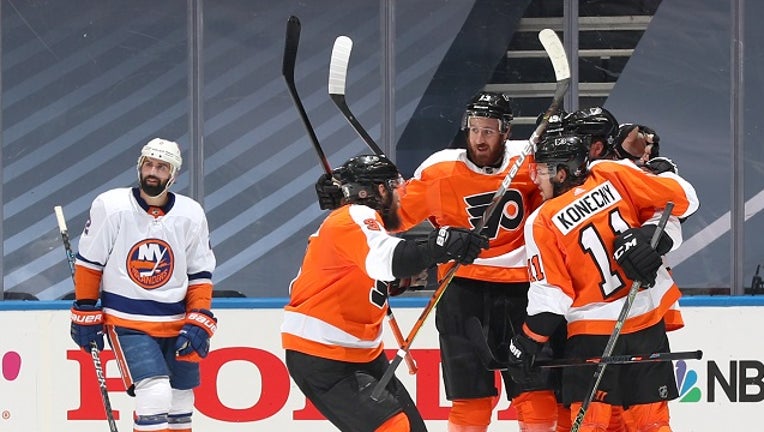 TORONTO - Scott Laughton scored on a redirect in overtime after Philadelphia blew a late two-goal lead, helping and the Flyers stave off elimination with a 4-3 win over the New York Islanders on Tuesday night.

Coming off consecutive losses, Philadelphia coach Alain Vigneault called on his top players to “put on their big boy pants” for Game 5 with the season on the line.

Claude Giroux and James van Riemsdyk responded with their sticks, scoring their first postseason goals after New York went up 1-0 on Josh Bailey's first-period goal. Matt Niskanen added his first playoff goal early in the third period to put the Flyers up 3-1.

The scrappy Islanders made a big push late, though, tying it on goals by Brock Nelson and Derick Brassard 93 seconds apart.

Laughton redirected Ivan Provorov's at 12:20 of overtime and Carter Hart stopped 29 shots to pull the Flyers within 3-2 in the best-of-seven second-round series.

Game 6 is Thursday in the Toronto bubble.

The Islanders put themselves in position to clinch the series with consecutive wins with different goalies in Games 3 and 4.

Varlamov returned to the crease after Thomas Greiss stopped 36 shots in Game 4 and was sharp early as the Flyers controlled play much of the first period.

The Islanders opened the second period on a power play after managing four shots in the first and immediately capitalized. Bailey

The Flyers withstood another New York push in the second and

Van Riemsdyk gave the Flyers their first lead since early in Game 3,

Niskanen made it 3-1 following a New York turnover in the third period, beating Varlamov with

Nelson seemed to catch Hart off guard with

NOTES: Flyers LW Michael Raffl missed his third straight game with an injury. ... Islanders C Matthew Barzal took a stick to the face in the third period and did not return. ... Flyers D Sean Couturier did not return after a collision in the second period. ... Bailey joins Ray Ferraro in 1993 as the only Islanders players in 36 years to average at least a point per game in a single postseason.

Game 6 is Thursday in Toronto.