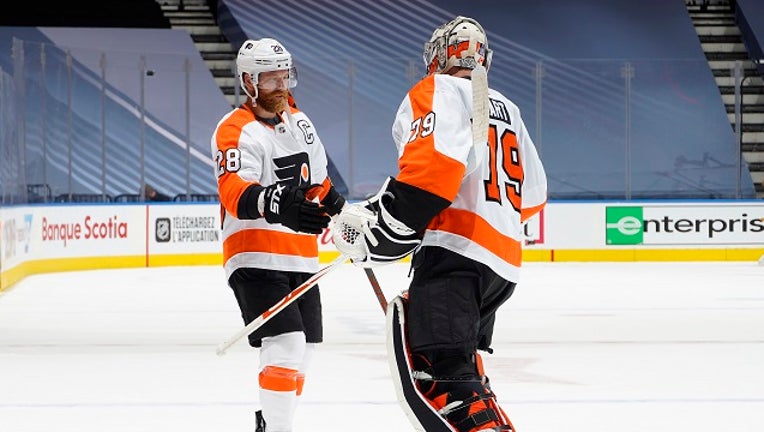 TORONTO - Carter Hart stopped 29 shots for his second straight shutout, Michael Raffl and Phil Myers each scored and the Philadelphia Flyers beat the Montreal Canadiens 2-0 on Tuesday to take a 3-1 lead in their Eastern Conference playoff series.

The top-seeded Flyers can wrap up the series in Game 5 on Wednesday. The Flyers haven’t advanced to the second round of the playoffs since 2012, made the Stanley Cup Final since 2010 or won it all since 1975.

Put in Broad Street in a bubble. The Flyers are playing like a serious contender to win the Cup.

It's the fifth time in NHL history a goalie had back-to-back postseason shutouts before age 23 and the first since Felix Potvin in 1994.

Hart again led the way. He became the youngest goalie in Flyers history to notch a shutout in Game 3 on Sunday at 22 years, 3 days and followed it up with another stellar effort against the Canadiens.

So much isn’t working for the Flyers. They entered 1-for-28 on the power play and the top line continues to struggle. But the depth that helped the Flyers win nine straight games shortly before the break and then win all of their round-robin games in the restart to grab the top spot was in full force.

Raffl flicked the puck past veteran Carey Price for a top shelf goal just 6:32 into the game for a 1-0 lead. Myers made it 2-0 with 2:56 left in the second on a shot that was set to wobble wide of the net. Price made a rare mistake and stabbed at the puck, only to have it deflect into the net and give Myers his second goal of the postseason.

Alain Vigneault, who led the New York Rangers and Vancouver Canucks to the Stanley Cup Final, has hit all the right notes in his first season on the bench in Philadelphia.

The Flyers used a record eight goalies last season but have been steadied under Hart — and stout backup Brian Elliott — in Vigneault’s first season. Vigneault rode Henrik Lundqvist in New York to within three wins of a championship and Roberto Luongo had four playoff shutouts when the Canucks reached the Final in 2011.

Hart doesn’t quite have the resume of those two stars quite yet — but with two straight shutouts, he’s proved worthy of the expectations heaped on him as Philadelphia’s franchise goalie.

NOTES: The Flyers F James van Riemsdyk and D Shayne Gostisbehere, once considered franchise cornerstones, were healthy scratches. ... Hart has given up one goal or fewer in seven of his past nine starts. ... The Flyers are 6-0 in the playoffs when they score first. ... The Flyers have played 28 consecutive playoff games without going to overtime. ... Montreal's Brendan Gallagher, who tied for the team lead with 22 goals, has yet to score one in the playoffs.