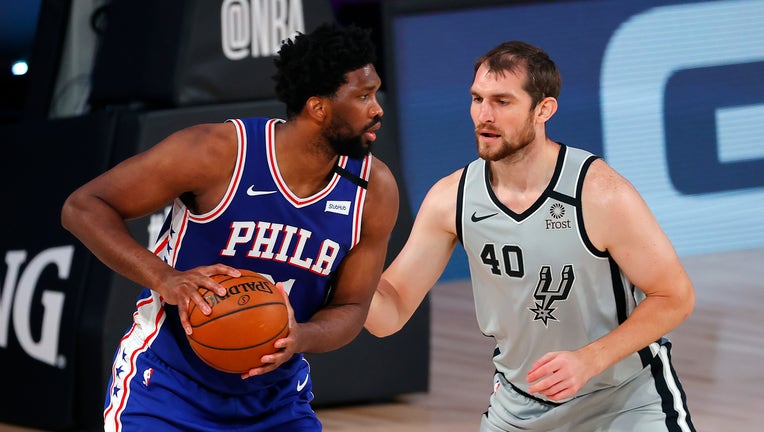 Joel Embiid #21 of the Philadelphia 76ers is defended by Tyler Zeller #40 of the San Antonio Spurs during the second quarter at Visa Athletic Center at ESPN Wide World Of Sports Complex on August 03, 2020 in Lake Buena Vista, Florida.

Joel Embiid had 27 points and nine rebounds for the 76ers, finishing the scoring with a free throw with 0.4 seconds to play.

The 76ers opened a 14-point lead early in the fourth quarter, then recovered after falling behind by four in the final minute.

Embiid, who was coming off a 41-point, 21-rebound performance in a loss to Indiana on Saturday, followed that effort by shooting 9 for 17 shots as Philadelphia evened its record in the restart.

Tobias Harris scored 25 points and Josh Richardson had 19 for the 76ers.

DeMar DeRozan scored 13 of his 30 points in the fourth quarter for San Antonio. Rudy Gay scored a season-high 24 points and Derrick White added 20.

San Antonio fell to 2-1 in Florida and missed a chance to gain ground in the Western Conference standings. The Spurs remained 1 1/2 games behind eighth-place Memphis.

San Antonio could have become the first team to win three games in the restart.

The 76ers inbounded trailing by two with 10 seconds left and left Milton plenty of room to shoot while trying to keep the ball from getting into Embiid. San Antonio's Jakob Poeltl then missed a contested layup in close, and the ball went out of bounds off the Spurs. Embiid made the first of two free throws to close the scoring.

Spurs: G Marco Belinelli sat out with a sprained left foot. He was injured during the San Antonio’s first restart game against the Sacramento Kings ... G Bryn Forbes sat out with tightness in his right quad.

76ers: Glenn Robinson III was out with a left hip pointer and Mike Scott sat out with soreness in his right knee. Both also missed Saturday’s game against Indiana. ... Ben Simmons fouled out in the fourth quarter with eight points and five assists in 25 minutes. ... Embiid had one rebound in the first half. ... Milton finished with 16 points.