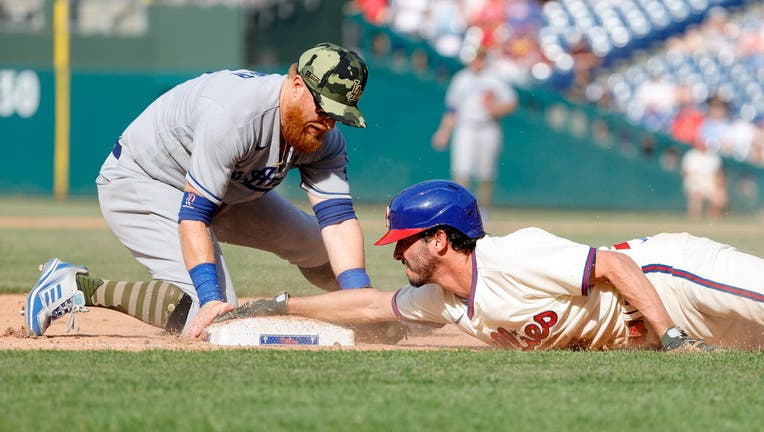 With two outs and men on second and third in the 10th, Alec Bohm hit a little dribbler off Evan Phillips (1-2) to Muncy at second for what appeared to be the final out of the inning. But Muncy didn't field it cleanly, allowing Garrett Stubbs to score the tying run and Roman Quinn to bring in the winning run just ahead of the throw home.

Stubbs had hit his first major league homer to get Philadelphia on the board in the sixth. The Phillies had tied the game with two outs in the ninth on Jean Segura's single to left that scored Nick Castellanos, whose two-out double started the rally.

Corey Knebel (1-3) pitched an inning to get the win.

Trae Turner had three hits for the Dodgers - including a single that had given the Dodgers a 3-2 lead by scoring Mookie Betts. Turner now has a 14-game hitting streak - tying Paul Goldschmidt for the longest in the National League this season.

Mookie Betts and Edwin Rios hit solo home runs while Tony Gonsolin struck out seven and allowed only one walk and three hits in the no-decision.

The Phillies received a strong outing from starting pitcher Zach Eflin, who struck out a career-high 12 while allowing four hits and walking two during his seven innings of work.

Eflin's only real hiccups came in back-to-back innings on a pair of hanging sinkers against the top of the Dodgers order. With two outs in the third, Betts generated his 10th homer of the year and his second in as many days with a blast into deep left-center. Then in the fourth, Rios sliced an opposite-field homer that just snuck over the wall in left field.

Phillies OF Mickey Moniak was scheduled to have a second rehab assignment start for Class A Clearwater on Sunday before getting transferred to Double A Reading to continue his ramp up following a broken right hand suffered at the end of spring training. When he returns, Moniak - the top pick in the 2016 Major League Baseball Draft- will likely end up as Philadelphia's primary centerfield option. ... SS Didi Gregorius was expected to fly with the club on its charter to continue the rehabilitation for his left knee sprain that has placed him on the injured list since May 5.

Dodgers: Travel to Washington to begin a three game set against the Nationals on Monday. Tyler Anderson (4-0, 4.04 ERA) will start the opener against Nationals RHP Joan Adon (1-7, 6.38).