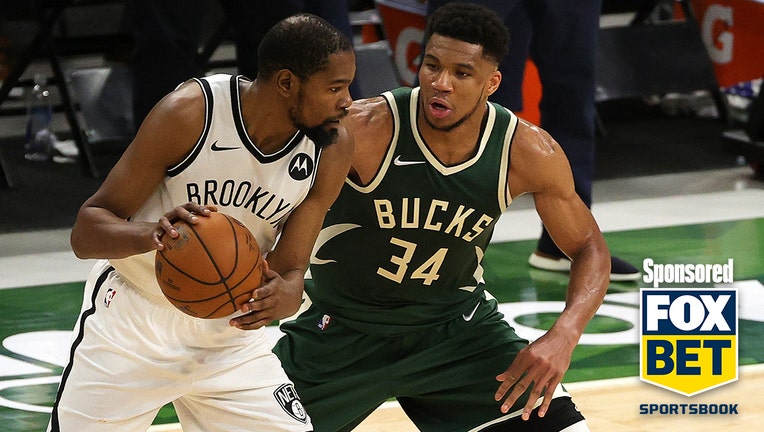 Kevin Durant of the Brooklyn Nets is defended by Giannis Antetokounmpo of the Milwaukee Bucks during a game at Fiserv Forum on May 2, 2021, in Milwaukee, Wisconsin. (Photo by Stacy Revere/Getty Images)

Between the injury to Anthony Davis that derailed the Lakers’ playoff hopes and the meniscus tear to Joel Embiid’s knee that has 76ers fans frowning, it feels like we could have the de facto NBA Finals starting Saturday when the Milwaukee Bucks play Game 1 against the Brooklyn Nets.

Betting this series will be equal parts fun and frustrating. The Nets are considerable favorites (-213 to win the series at FOX Bet, which implies a 68% chance to advance), and that’s been the case for the last two months.

But how do you handicap this Brooklyn team that rarely played at full strength during the regular season, then put up historically efficient offensive numbers in the first round against a Boston squad that was missing Jaylen Brown (all five games) and Kemba Walker (Games 4 and 5)? The Nets scored 120 points or more in the final four games of their first-round series and, for the season, had an astronomical offensive rating of 130.1 points per 100 possessions. For perspective, the Stephen Curry-Kevin Durant Warriors' top postseason offensive rating was 119.9.

Then there are the adjustments for Brooklyn from the regular season to the playoffs. For instance, the Nets had DeAndre Jordan start 43 games at center in the regular season; Blake Griffin started all five games at center versus Boston. Against the Bucks, though, I'd expect lots of Durant at center, as Brooklyn forces Lopez off the court and thus opens the lanes for James Harden and Kyrie Irving to drive and kick. Incredibly, Durant, Harden and Joe Harris all shot 47 percent or better on 3-pointers against Boston.

If we assume Giannis defends Kevin Durant – remember, he drew Jimmy Butler last round and held him to 29 percent shooting and 14.5 points per game – I think defensive stalwart Holiday will be matched up with Harden. As a result, Irving is going to be the key to the series for the Nets, which could be tricky for bettors. Irving can be up-and-down (although most of that is non-basketball related), and the last time he faced the Bucks in a playoff series (2019), he was a dreadful turnover machine and argued with his Celtics teammates the entire time. Then, he left in the offseason.

The point guard is undeniably one of the 15 best players in the NBA, and his situation in Brooklyn is different than the one in Boston, but betting on his points or assists in this series is going to be a hold-your-nose play. You'll want to keep a close eye on the game-to-game lines there.

On the other side of the coin, I totally read the Bucks versus Heat series wrong, thinking Miami coach Erik Spoelstra would once again bottle up Giannis Antetokounmpo and the Milwaukee offense. The Bucks swept the Heat, getting payback for last year’s ugly playoff exit. But be careful how much you read into that series, because center Brook Lopez averaged 28.5 minutes per game, a number he is unlikely to reach against the wing-heavy Nets.

From a betting prop perspective, Bryn Forbes and PJ Tucker are players to watch for overs. If the Bucks are going to switch everything on the perimeter defensively, the Giannis-Tucker combo up front, surrounded by Khris Middleton, Jrue Holiday and Forbes or Pat Connaughton, is going to be their most-used lineup. And Tucker will likely be the same corner 3-point guy he was in Houston from an offensive perspective.

Forbes was exceptional versus Miami in the final three games, shooting 54% from the field and 53% on 3-pointers. He only had five games all season with 20+ points; he had two of them against the Heat in the first round. The season-ending injury to Donte DiVincenzo means even more shots for Forbes. And remember, Forbes has playoff experience with the Spurs before he got to Milwaukee, so the guess here is that Mike Budenholzer will trust him with 25+ minutes per game.

I’d wait a couple games to bet totals, as the Bucks defense (10th in efficiency after being first the prior two seasons) is considerably more stingy than Boston’s. But if you're feeling froggy and want to leap early, my guess is we see a low-scoring game or two at the outset. At FOX Bet, the total over-under for Game 1 is set at 239.5, the Nets are 4-point favorites, and the Bucks are +135 to win outright (bet $10 to get back $23.50).

As for the series? Yes, the Nets have three of the four best players in the series, and offense trumps defense in today’s NBA. Yet I’ve been clutching at this idea that the Nets might struggle if they’re hit with adversity, given three alphas in that locker room and a first-time head coach. Milwaukee has seen it all the last two years – up 2-0, then collapsing against an aggressive Toronto defense; crumbling against intense defense from the Heat last year. They're tested. They’ll be able to hang with the Nets offensively.