Eagles Executive Vice President and General Manager Howie Roseman discussed what he called a 'disappointing' season and addressed the team's quarterback situation heading into the offseason.

PHILADELPHIA - The Philadelphia Eagles chose to give a third-string quarterback playing time in a game with playoff implications for other teams.

Coach Doug Pederson benched Jalen Hurts for Nate Sudfeld in the fourth quarter of a 20-14 loss to Washington on Sunday night. The victory gave Washington (7-9) the NFC East title. The New York Giants (6-10) would’ve won the division crown if Philadelphia (4-11-1) had won.

The decision didn’t go over well with Giants players posting their reaction on Twitter. Sudfeld hadn’t thrown a pass since 2018 and was picked on his second attempt. He also lost a fumble.

"Yes, I was coaching to win," Pederson said. "Yes, that was my decision solely. Nate has been here four years and I felt he deserved an opportunity to get some snaps."

The loss gave the Eagles the sixth pick in the NFL draft. A victory would’ve dropped them to the ninth spot.

"Nobody who stepped on that field wanted to lose," said running back Boston Scott, who had 65 yards rushing. "Nobody lacked energy."

Hurts had a pair of 6-yard touchdown runs to help the Eagles overcome a 10-0 deficit but he misfired on his last pass, a 4-yard toss into the end zone that would’ve given them a lead late in the third quarter. 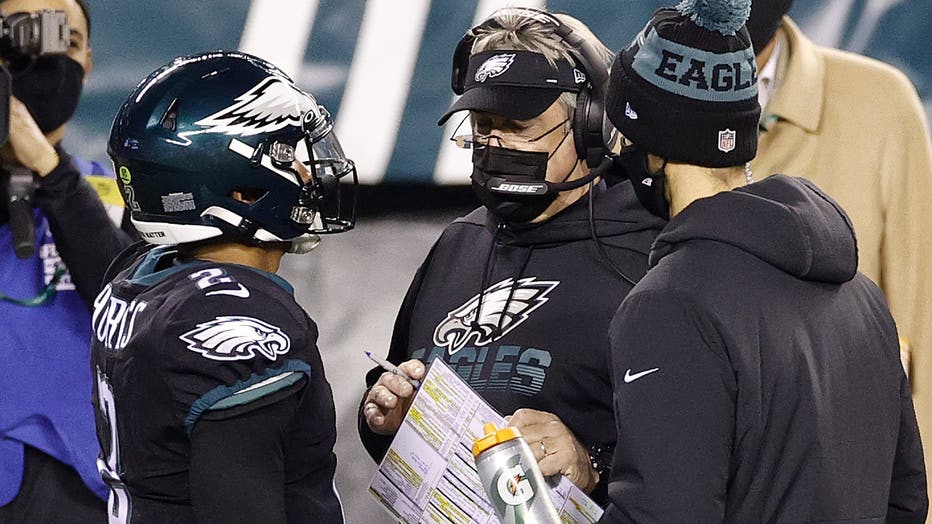 Hurts, who took over for Carson Wentz last month, finished 7 of 20 for 72 yards with one interception. His passer rating of 25.4 was the lowest by an Eagles starting quarterback since Nick Foles posted a 9.3 rating in the final regular season game in 2017. Foles finished that season as Super Bowl MVP.

"As a competitor, I play to win," Hurts said about getting pulled. "Just trust Coach with that."

Hurts said he knew Pederson had planned to give Sudfeld some snaps.

"I know Coach had a plan to go about it the way he did and stuck to his plan," Hurts said.

Doug Pederson continued to defend his decision to insert third-string quarterback Nate Sudfeld into the game late in Sunday's loss.

The Eagles missed the playoffs for the first time since Pederson’s first season in 2016. They face several important decisions in the offseason, starting with their quarterback dilemma. Wentz’s $128 million, four-year contract extension kicks in next season. The team would have to absorb a significant cap hit by trading him.

"I was granted the opportunity to lead the team," Hurts said. "I had every intention of making it to the postseason. ... That will sit on my chest all offseason."