Eagles coach Doug Pederson says the team has not yet decided who will start Sunday after the team benched Carson Wentz for rookie Jalen Hurts Sunday afternoon.

The Philadelphia Eagles (3-8-1) have lost four in a row and are headed nowhere in the NFC East, even though they’re still within 1 1/2 games of the first-place New York Giants (5-7).

Wentz was benched in the second half of a 30-16 loss at Green Bay on Sunday following another subpar performance during the worst season of his five-year career. Hurts provided a spark against a defense that played softer coverage with a 20-point lead. He tossed a 32-yard touchdown pass but also threw an interception and was sacked three times after the Packers went back to their aggressive scheme. 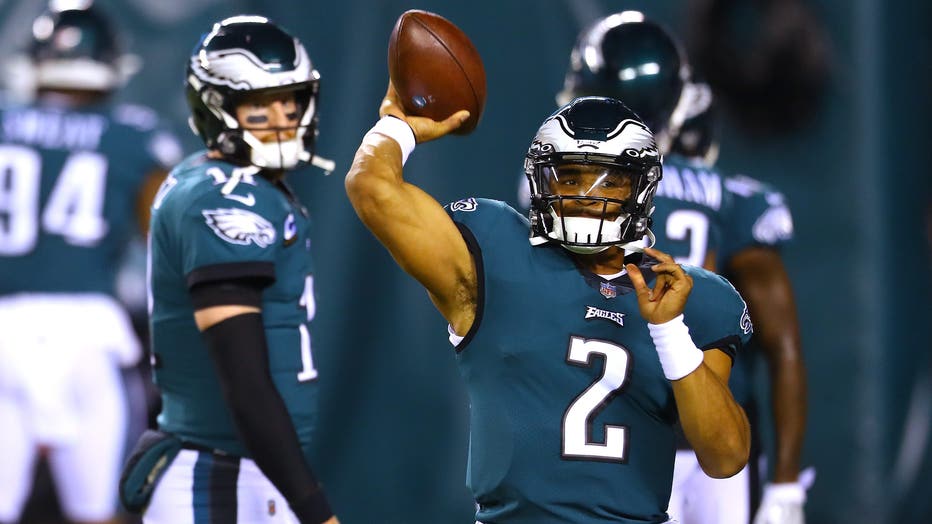 Jalen Hurts #2 warms up as Carson Wentz #11 of the Philadelphia Eagles looks on against the Seattle Seahawks at Lincoln Financial Field on November 30, 2020 in Philadelphia, Pennsylvania. (Photo by Mitchell Leff/Getty Images)

Pederson made it clear he has final say on the decision and he’s not seeking much input.

“This will be my decision,” he said. “I don’t feel like I need to communicate with anybody, players, other coaches. I think it’s just, again, it’s obviously my decision, the opportunity that I have moving forward, and it will solely be up to me.”

Wentz signed a $128 million, four-year contract extension that kicks in next season. Hurts was a second-round pick this year. Pederson’s decision affects the team’s future, so owner Jeffrey Lurie and general manager Howie Roseman will want to provide their thoughts.

Pederson and Wentz came to Philadelphia in 2016. They led the Eagles to the franchise’s only Super Bowl title in 2017. Wentz was 11-2 before a knee injury forced him to watch Nick Foles lead the Eagles through the playoffs and victory over New England.

Wentz finished third in NFL MVP voting that season, and last year he became the first quarterback in NFL history to throw for more than 4,000 yards without one wide receiver having 500 yards receiving.

But Wentz has struggled this season. He has a career-low 72.8 passer rating and 19 turnovers, including 15 interceptions. He hasn’t had much help. The injury-depleted offensive line has allowed 53 sacks, and his young, inexperienced receivers often aren’t open.

“I’m not going to sit here and point the finger or point blame, especially at the quarterback position, because there’s enough to go around,” Pederson said.

Hurts or Wentz scrambling after protection breaks down and they have nowhere to throw has been Philadelphia’s best hope at moving the chains. The duo combined for 47 yards rushing.

The entire offense, from a line that allowed seven more sacks to receivers who struggle to get open to the quarterbacks missing throws.

First-round pick Jalen Reagor returned a punt 73 yards for a touchdown. He caught one pass for 34 yards from Hurts.

Wentz has gone from franchise quarterback and MVP contender to the bench in three seasons.

Pederson said linebacker Davion Taylor (knee) will miss some time and he’s waiting on a report on left guard Jason Peters (foot). He said linebacker T.J. Edwards (hamstring) will be limited in practice this week. Cornerback Darius Slay (knee) should be fine.

17 — Jake Elliott missed an extra point in the fourth quarter that prevented the Eagles from scoring 17 points in four straight games.

The Eagles host the NFC-leading New Orleans Saints (10-2) on Sunday. The Saints have won nine straight games and already clinched a playoff berth.