Eagles coach Doug Pederson says the team has not yet decided who will start Sunday after the team benched Carson Wentz for rookie Jalen Hurts Sunday afternoon.

GREEN BAY - Aaron Jones rushed for 130 yards and delivered a game-clinching 77-yard touchdown run with 2:36 left as the Green Bay Packers withstood a fourth-quarter comeback attempt to defeat the Philadelphia Eagles 30-16 on Sunday.

Aaron Rodgers connected with Davante Adams on two of his three touchdown passes and reached a couple of career milestones to help Green Bay (9-3) hand the Eagles (3-8-1) their fourth consecutive loss. Kingsley Keke had two of the Packers' seven sacks. 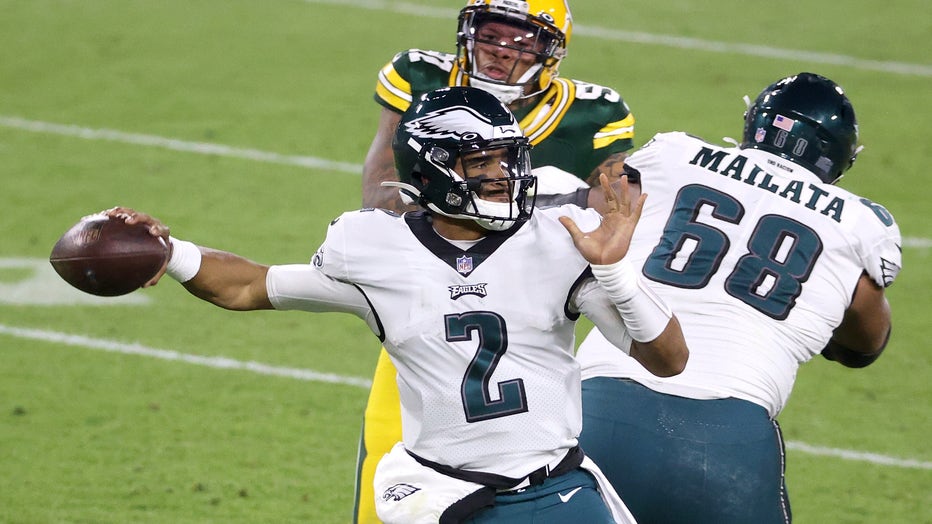 GREEN BAY, WISCONSIN - DECEMBER 06: Jalen Hurts #2 of the Philadelphia Eagles looks to pass during the fourth quarter of their game against the Green Bay Packers at Lambeau Field on December 06, 2020 in Green Bay, Wisconsin. (Photo by Dylan Buell/Get

Green Bay owned a 23-3 lead in the fourth quarter when the Eagles scored two touchdowns in a span of just over a minute. Rookie quarterback Jalen Hurts, who took over for an ineffective Carson Wentz midway through the third quarter, started it by throwing a 32-yard touchdown pass to Greg Ward on fourth-and-18. Jalen Reagor then delivered a 73-yard punt return to cut the lead to 23-16 with 6:30 left, though Jake Elliott missed the extra point.

The Eagles forced a second straight three-and-out, but couldn't move the ball and punted. That's when Jones put away the game.

Jones ran through a big hole in the middle of the line, broke an attempted ankle tackle and headed downfield as a second defender made an unsuccessful diving attempt to bring him down. He raced down the left sideline and eluded a third defender inside Philadelphia's 30-yard line, worked his way through traffic before heading into the end zone.

Rodgers, who went 25 of 34 for 295 yards, increased his career touchdown passes to 400, the seventh NFL player to join that fraternity. The others are Tom Brady, Drew Brees, Peyton Manning, Brett Favre, Dan Marino and Philip Rivers.

Rodgers put the Packers ahead for good with a 1-yard pass to Adams on fourth down in the second quarter. Rodgers and Adams connected again on a 9-yarder to cap a 99-yard drive in the third period.

Adams, who caught 10 passes for 121 yards, has scored in seven straight games to tie Hall of Famer Don Hutson's franchise record. Hutson had a pair of seven-game TD reception streaks in 1941-42 and 1943-44.

Rodgers also threw a 25-yard touchdown pass to Robert Tonyan in the final minute of the second quarter.

Philadelphia's offense couldn't do much most of the day as the Eagles used their 11th different starting offensive line combination. Philadelphia has given up a a league-high 53 sacks, at least three sacks in 10 straight games.

The Eagles showed some signs of life after Hurts took over for Wentz, who signed a $128 million, four-year contract extension in 2019 that starts next year. Hurts was 5 of 12 for 109 yards with an interception to go along with his touchdown pass. Wentz was 6 of 15 for 79 yards.

The Packers visit the Detroit Lions.