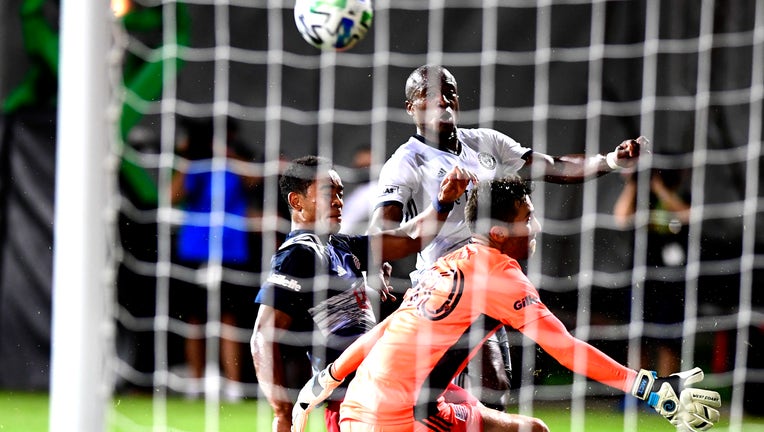 REUNION, FLORIDA - JULY 25: Sergio Santos #17 of Philadelphia Union scores a goal past Matt Turner #30 of New England Revolution in the second half during the knockout round of the MLS is Back Tournament at ESPN Wide World of Sports Complex on July 2 (Getty Images)

LAKE BUENA VISTA, - Sergio Santos scored in the 63rd minute and the Philadelphia Union overcame a quiet first half to advance to the quarterfinals of the MLS is Back tournament with a 1-0 victory over the New England Revolution on Saturday night.

The Union will play the winner of Sunday's match between the Vancouver Whitecaps and Sporting Kansas City in a quarterfinal on Thursday.

The Revolution were eliminated but not without some drama. New England coach Bruce Arena, the former U.S. national team coach, was handed a red card following the game, apparently for comments made to officials.

The opening half lacked highlights with both teams looking flat. One of Philadelphia's best chances came late when Santos got loose in the box, but his shot went wide.

New England goalkeeper Matt Turner made a pair of first-half saves to keep the match scoreless at the break.

Union goalkeeper Andre Blake leaped to direct Gustavo Bou's well-struck free kick up and over the crossbar in the 57th minute.

Santos found Turner off his line for a left-footed shot into the far upper corner of the net to finally break through for the Union.

Arena made five changes to New England's lineup for the match. The Revolution were without Carles Gill, who was out with a foot injury after sitting on the sidelines in a boot for the last game of the group stage.

New England had a win and two draws to finish second in its group. The results of the opening stage count toward the regular season.

Philadelphia won a pair of games in the group stage to the 16 teams that played through to the knockout round.

The Union's Jose Martinez was back in the lineup after serving a one-game suspension for violent conduct against Inter Miami defender Andres Reyes in a group match.