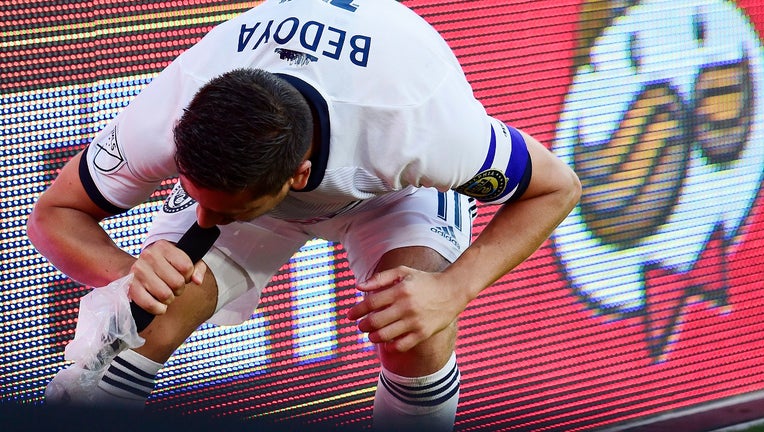 Alejandro Bedoya yells into a television microphone after scoring a goal in the first half against the D.C. United. (Photo by Patrick McDermott/Getty Images)

WASHINGTON - Alejandro Bedoya made a statement about gun violence in the nation's capital.

After scoring the opening goal in the Philadelphia Union's 5-1 victory over D.C. United on Sunday night, Bedoya ran to an on-field microphone and shouted to the crowd: "Hey Congress, do something now! End gun violence! Let's go!"

The 32-year-old Bedoya has played for the U.S. national team.

Bedoya first-timed a right-footer off the post into the net to give Philadelphia (12-7-6) the lead in the third minute. Union goalkeeper played a clearance into the left side of the attacking half where Andrew Wooten won the ball from defender Donovan Pines and crossed it to Marco Fabián, who fed Bedoya for the finish from just outside the box.

Marco Fabián had two goals and an assist for the Union.

Fabián side-footed a first-timer, off a cross from Kai Wagner, in first-half stoppage time and, after a United turnover, Kacper Przybylko's side-netter made it 3-0 in the 52nd minute.

Frédéric Brillant scored in the 54th for D.C. (9-7-9). Fabián struck again in the 70th minute, and Fabrice-Jean Picault capped the scoring in 90th.

United, which was outshot 26-11 and is winless in its last three games, played a man down after Júnior Moreno was shown a straight red card in the 40th for denial of an obvious goal scoring opportunity.