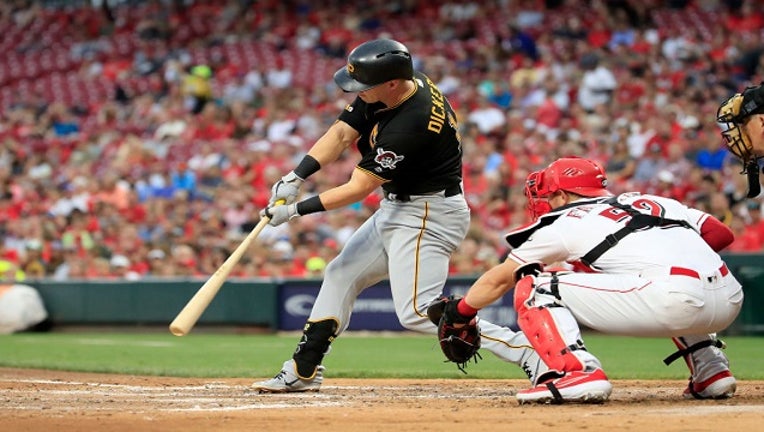 Corey Dickerson #12 of the Pittsburgh Pirates hits a two RBI single in the third inning against the Cincinnati Reds at Great American Ball Park on July 30, 2019 in Cincinnati, Ohio. (Photo by Andy Lyons/Getty Images)

PHILADELPHIA - After making their biggest splash in the offseason, the Philadelphia Phillies were more conservative at the trade deadline.

The Phillies acquired outfielder Corey Dickerson from the Pittsburgh Pirates on Wednesday for a player to be named and $250,000 in international signing money. They also acquired right-hander Dan Straily from Baltimore for cash and assigned him to Triple-A. On Monday, the Phillies obtained lefty Jason Vargas from the Mets.

"For this team to accomplish what it wants to accomplish, we're going to need the stars in that room to carry us," general manager Matt Klentak said. "We have the talent. We had a very splashy offseason. We brought in a lot of talent and those guys are going to have to do what they do to push us into October. But we thought it was important to improve the team around them, provide the team with all the support that we could to put our better players in position to take us where we wanted to go."

The Phillies entered Wednesday night's game against San Francisco tied for the top wild-card spot in the NL and 6 ½ games behind NL East-leading Atlanta. They were expected to contend for the division after spending $330 million on Bryce Harper, and adding J.T. Realmuto, Jean Segura, Andrew McCutchen and David Robertson. McCutchen tore his ACL in June and Robertson announced before the game he needs season-ending surgery.

Dickerson is hitting .317 with 18 doubles, four homers and 25 RBIs with a .931 OPS in 43 games this season. He grounded out as a pinch-hitter earlier in the day during Pittsburgh's 4-1 loss at Cincinnati and isn't expected to join Philadelphia until Thursday.

"Just get me there and get to know everybody," Dickerson said. "Just get there when I can and go over everything that's been going on and start talking about opportunity and what the plan is."

Dickerson won a Gold Glove last year and was an All-Star in 2017 for Tampa Bay.

"When you're always doubted and that's always been the weakness of your game, to accomplish it over the course of 162 is tough," Dickerson said of his defense. "You work really hard and people don't see all the hard work you put in, so it's gratifying."

"He's a guy that can play regularly for us," manager Gabe Kapler said. "Corner outfield spots, can stand in center field, he has a history of playing all three. ... He can certainly play multiple positions for us and hit in various spots in the lineup; against right-handed pitching, he's especially effective in his career. He's made some really notable adjustments along the way. He has a strikeout rate that is really an impressive feat in this league."

The Phillies designated outfielder Dylan Cozens to make room for Dickerson on the 40-man roster. Straily was 2-4 with a 9.82 ERA in 14 games this season.

"I suffered a setback since the last time I had the initial flexor strain injury," Robertson said. "At this point, it's worsened. So I've kind of got a lot of concern about it, and I think the only way to have my elbow fixed, to be able to get back on this playing field, is to surgically have it repaired. And there is some concern not only about my flexor tendon but my UCL. So it's been a tough two days for me. Personally, I am pretty frustrated with myself and pretty disappointed because I really wanted to step in and be on this team and help make a difference, but it just hasn't worked out for me."