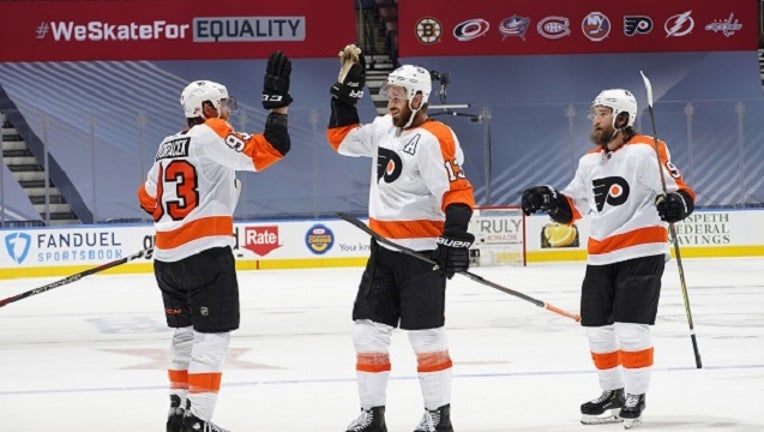 TORONTO - Ivan Provorov scored at 15:03 of the second overtime and the Philadelphia Flyers beat the New York Islanders 5-4 on Thursday night to force a deciding Game 7.

Kevin Hayes, James van Riemsdyk, Michael Raffl and Scott Laughton also scored for Philadelphia, and Carter Hart made a career-high 49 saves. The Flyers won a third overtime game in a postseason series for the first time.

Mathew Barzal and Derick Brassard each had a goal and an assist, and Anders Lee and Matt Martin also scored for New York, which trailed 2-0 midway through the first period before taking leads of 3-2 and 4-3. Semyon Varlamov stopped 26 shots.

Game 7 is Saturday, with the winner advancing to face Tampa Bay in the conference finals

Philadelphia had a chance on a flurry in front of the Islanders' net early in the second overtime, but Varlamov stopped the puck and defenseman Adam Pelech dove at the loose puck to keep it out with his stick and glove.

After Pelech lost the puck on a shot attempt when his stick broke, the Flyers pushed it up the ice and Provorov got a pass from Hayes and beat Varlamov.

Hart had 38 saves in regulation. He made several nice stops in the first extra period, including a save on Jordan Eberle's backhand midway through.

Laughton, who had the overtime winner in Game 5 on Tuesday night, tied it at 4. He brought the puck up the left side on a rush, went forehand-backhand-forehand and beat Varlamov at 9:53 of the third.

The Islanders had a flurry of chances during a power play late in regulation, but Hart stopped two slap shots by Ryan Pulock, and tries by Barzal and Lee — all in the span of 11 seconds.

The Flyers got an emotional lift from the return of left wing Oskar Lindblom for the first time since Dec. 7. The 24-year-old was diagnosed with a bone cancer and was undergoing radiation treatments that finished July 2. He rejoined the team in Toronto last month during the Flyers' series against Montreal.

Trailing 2-1 after 20 minutes, the Islanders took the lead with two goals early in the second period.

First, Martin fired a shot that went off Flyers defenseman Justin Braun and through Hart's five-hole just as the Islanders' Casey Cizikas came crashing into the goalie. at 1:24. Replays showed Cizikas was tripped by Braun.

Flyers coach Alain Vigneault challenged for goalie interference but the call stood, putting the Islanders on the power play. It was Vigneault's third failed challenge of the series.

The Islanders took advantage 1:42 later as Mathew Barzal's shot from the right side was stopped by Hart, but the puck rebounded to the left, where Lee lifted it high over the goalie to put New York ahead. It was Lee's fourth of the series and seventh of the postseason.

Raffl tied it at 3 as he knocked in the rebound of a shot by Nicolas Aube-Kubel with 6:39 left in the middle period.

Barzal put New York back on top when he beat Hart from the left circle with 30 seconds remaining in the second.

New York went on the power play 3:05 into the game when Philadelphia's Derek Grant was whistled for delay of game, but the Islanders managed just one shot on goal during the advantage.

Hayes got the Flyers on scoreboard first after the Islanders turned the puck.Hayes got a pass from Travis Konecny and beat Varlamov high on the blocker side with 9:44 left in the opening period.

The Flyers made it 2-0 when van Riemsdyk beat Varlamov with a slap shot from the left circle with 8:08 left.

Aube-Kubel was sent off for slashing with 5 1/2 minutes left, putting the Islanders on the their second power play. Once again, New York managed just one shot on goal during the advantage.

However, just seconds after the penalty expired, Brassard tipped a pass from Devon Toews past Hart to pull the Islanders within one.

NOTES: Islanders had Barzal back in the lineup after he left Game 5 late in the third period when he was hit in the face by a stick. ... The Flyers were without F Sean Couturier, who left Game 5 in the second period after a collision with Barzal. ... New York was 1 for 6 on the power play. Philadelphia was 0 for 4.