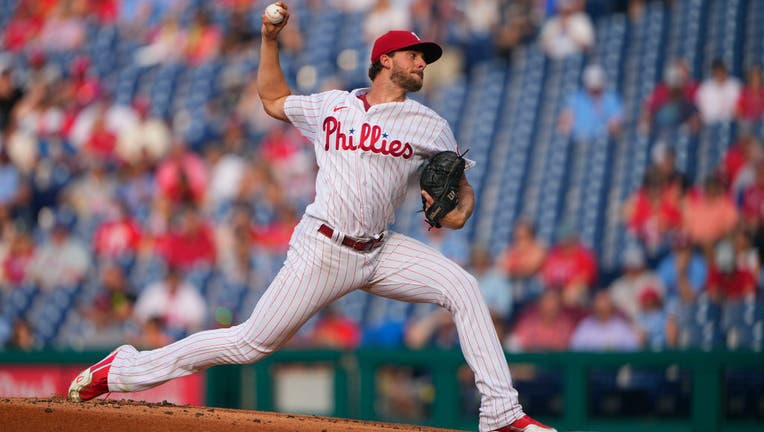 PHILADELPHIA - Kyle Schwarber and Nick Maton homered to help the Philadelphia Phillies snap a five-game losing streak with a 6-5 victory over the San Francisco Giants on Wednesday night.

Phillies star Bryce Harper was a late scratch from the lineup due to right forearm soreness, and second baseman Jean Segura was ruled out for up to three months with a fractured right index finger.

Maton, Segura’s replacement at second base, also had an RBI bunt single as Philadelphia avoided a three-game sweep and won for just the fifth time in 17 games while likely cooling calls for manager Joe Girardi’s job — at least for now.

Wilmer Flores hit a three-run homer for the Giants.

Philadelphia starter Aaron Nola (3-4) was cruising until allowing five runs in the sixth inning. The Phillies picked him up in the bottom of the frame against reliever Jarlin Garcia (1-2).

Maton, who was called up from Triple-A prior to the game, hit a one-out homer to right to pull the Phillies within 5-4. It was the first earned run allowed by Garcia this season after going a club-record tying 17 straight appearances without giving one up and 22 consecutive outings without an earned run dating to last season.

After Bryston Stott singled, Schwarber launched a 3-0 fastball over the wall in right to put Philadelphia ahead 6-5.

Corey Knebel, who had given up homers in back-to-back appearances, pitched a 1-2-3 ninth for his ninth save in 12 chances.

The Giants had climbed out of a 2-0 hole with five runs in the top half off Nola.

Doubles by Donovan Walton and Jason Vosler to start the inning got San Francisco on the board. Tommy La Stella singled, Nola hit Mike Yastrzemski with a pitch and Flores drilled an 0-1, 77-mph slider to the seats in left for a 5-2 lead.

The sudden turnaround caused disgruntlement among many in the crowd of 22,213, with some loudly yelling that Girardi had managed his last game in Philadelphia. The Phillies manager has been under scrutiny as a team with a club-record payroll and high preseason expectations continued to slide out of contention. Philadelphia remained 12 ½ games behind the NL East-leading Mets.

Fans left cheering when Knebel struck out Curt Casali to end the contest.

Giants: INF Evan Longoria (right shoulder soreness) was not in the starting lineup but struck out pinch-hitting in the eighth. ... OF Austin Slater (left wrist inflammation) is eligible to return from the injured list Thursday. He traveled with the team to Philadelphia and has taken batting practice. ... OF Steven Duggar (left oblique strain), out since April 22, begins a rehab assignment at Triple-A Sacramento on Thursday.

Phillies: Harper has been the team’s designated hitter after being diagnosed with a small UCL tear in his right elbow, which he hurt on a throw from right field in April. The two-time MVP had a platelet-rich plasma injection in his injured right elbow May 15 and then missed the next five games to recover. He has been back in the lineup since and was in Girardi’s original lineup Wednesday. Harper, who last played in the field on April 16, is batting .303 with 10 homers and 32 RBIs in 45 games. ... Segura was injured while attempting to bunt in the seventh inning of Tuesday’s 7-4 11-inning loss to the Giants. He will have surgery as early as Friday and will miss 10 to 12 weeks.

Phillies: After a day off, host the Los Angeles Angels for a three-game series that begins on Friday. Neither team has announced their starter.