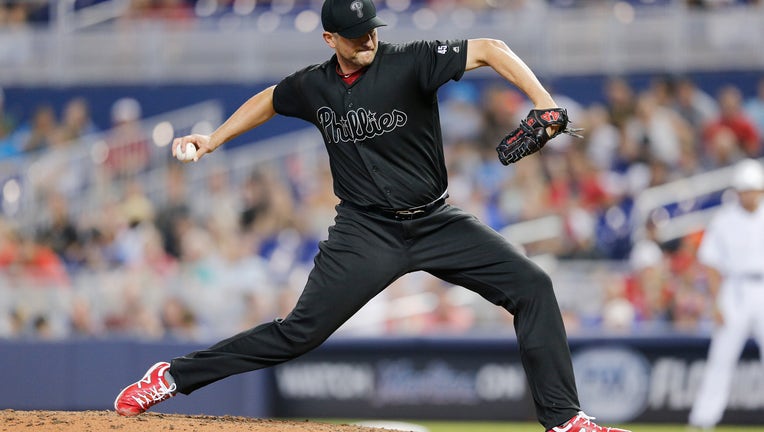 MIAMI, FLORIDA - AUGUST 25: Jared Hughes #25 of the Philadelphia Phillies delivers a pitch in the eighth inning against the Miami Marlins at Marlins Park on August 25, 2019 in Miami, Florida. Teams are wearing special color schemed uniforms with play

MIAMI - Starlin Castro's two-run double in the sixth inning capped a comeback by the Miami Marlins, who rallied against Aaron Nola to beat the Philadelphia Phillies 3-2 Sunday.

Four Miami pitchers combined on a four-hitter and allowed one walk after giving up 10 bases on balls in each of the first two games of the series.

Elieser Hernandez (3-5) gave up two runs in six innings. Ryne Stanek pitched around a leadoff walk in the ninth for his first career save.

The last-place Marlins improved to 9-7 against the Phillies with three games yet to play in late September. Philadelphia has won the season series each of the past nine years.

Nola (12-4) faced the minimum until the sixth, when he allowed four consecutive batters to reach as the Marlins erased a 2-0 deficit. Jon Berti singled home a run, and Castro put them ahead 3-2.

Nola allowed three runs in seven innings and lost for only the second time since June 21.

Hernandez allowed just one baserunner until César Hernandez singled off the wall with two out in the sixth. Hoskins then homered for a 2-0 lead.

The Phils didn't have an at-bat with a runner in scoring position.

The Phillies return home Monday, when LHP Jason Vargas (6-6, 3.99) is scheduled to start in the opener of a three-game series against Pittsburgh. Vargas is 0-1 despite a 3.91 ERA in four starts this month.

Marlins RHP Pablo Lopez (5-5, 4.23) is scheduled to come off the injured list to pitch Monday night against Cincinnati. He has been on the injured list since June 19 with a right shoulder strain. "It's been forever since I've been on this mound," Lopez said. "I'm real excited."