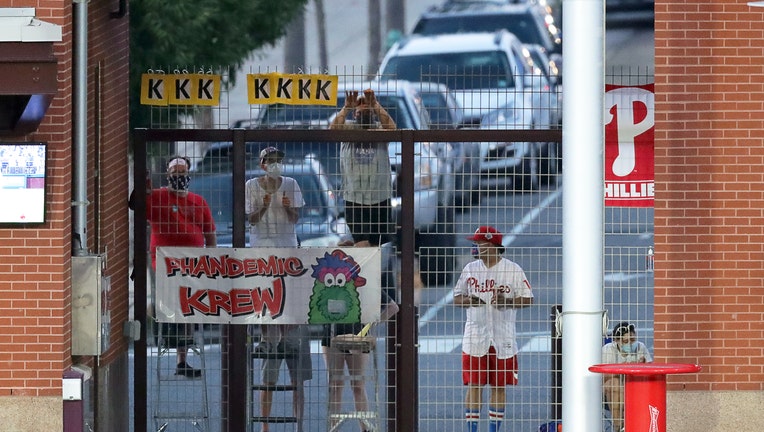 Fans of the Philadelphia Phillies known as the Phandemic Krew watch from outside the stadium gates during a game against the Atlanta Braves at Citizens Bank Park on August 10, 2020 in Philadelphia, Pennsylvania. The Phillies won 13-8. (Photo by Hunte ((Photo by Hunter Martin/Getty Images))

PHILADELPHIA - The climb up the ladder positioned against a gate outside the Phillies' ballpark nearly 450 yards away from home plate comes with more than a distant view of baseball.

It also comes with a major mandate: "You're in charge of the air horn," said Phillies fan Brett MacMinn.

Who knew the block party of the summer would be thrown at Phillies games, where baseball's gatekeepers locked out fans but can't silence the die-hards who packed their vuvuzelas, air horns and homemade banners and stirred up the staid atmosphere inside Citizens Bank Park?

The Phandemic Krew ring those noisemakers like they're celebrating at the Mummers Parade. Just ask Yankees manager Aaron Boone, who got riled up last week when the growing pack of Phillies fans busted up the silence with a cacophony of honking and cheering.

"It's nice to at least hear something  out there, even if they're quite far away," Philadelphia catcher J.T. Realmuto said.

Realmuto surely can hear them -- chants to "Sign J.T." for the Phillies to re-sign their popular and productive free-agent catcher have been a game-day staple.

MacMinn is a founding father of the group that started as a trio to catch the Phillies work out during summer camp at the ballpark and neighboring FDR Park after baseball's restart following the COVID-19 shutdown. The gathering has become larger -- and louder -- on the sidewalk at 10th Street and Phillies Way outside the outfield concourse known as Ashburn Alley. Phillies fans set up ladders and lawn chairs to root for the home team. Oh, and don't forget the binoculars and radios to stay current on the action. And if you can bring an extra air horn for all the home runs, please honk away.

"These are actually getting hard to find," said MacMinn, 44. "It's like the new toilet paper."

Baseball fans need a dose of creativity to sneak peeks at strikes and singles this year and have taken to neighboring rooftops and hotel rooms only to watch the biggest stars be reduced to the size of ants. The spot outside CBP doesn't have a natural view of the field; at best, squint and third base is the only visible object. Use the ladders -- it's a bring-your-own kind of event -- and the entire infield comes into view. The TVs set on the Ashburn Alley brick walls usually reserved for fans to stay tuned to the action while they nosh on cheesesteaks, beers and crab fries have been turned on for the Krew and make it a scene straight out of a gated sports bar.

The fans these days grab Yuenglings from the cooler, scarf hoagies out of WaWa wrappers and get a cameo through the other side of the gate from their new best friend, the Phanatic.

The only commotion louder than the banging on ladder steps and out-of-tune orchestra came last week from Boone's bellyaching that the Krew was a distraction. The Yankees skipper complained about the horns to umpires, but they couldn't prevent the fans from using them.

"The environment we're in, it's almost like a golf environment," Boone said. "I thought there was a timing element to it."

Though the fans are small in numbers, the Phillies are happy to have a home-sidewalk advantage. Manager Joe Girardi has championed their presence and announcers like former Phillies Larry Anderson and John Kruk have stopped by for photos.

"The Phandemic Krew has been well-received by our players, so they're great to have around," Phillies security director Sal DeAngelis said. "We have no plans to take any restrictive actions, but if the group continues to grow, we will reassess at that time."

The "Ph" in the name is a colloquialism in the city -- where a winner is often Phantastic! -- and the "K" in the Krew was adopted in honor of Bryce Harper's son, Krew.

Oh, and the Krew keeps things safe -- masks are required, chalk X's are marked 6 feet apart on the sidewalk for those who wish to stand, bottles of sanitizer are wedged inside the gate and it's elbow bumps only after a Phillies homer. The Phillie Phanatic has an extra-wide mask over his honker on the team's red "Phandemic Krew" banner the  members tied to the gate in 90-plus degree heat.

The Krew have talked about taking the show on the road and have discussed hitting Washington.

Oscar Alvarado, one of the co-founders, has been a season ticket holder since 2005 and normally sits in Section 201, Row 2, Seats 2 and 3 in the right field porch. He wore his 2008 World Series hat, a Phillies mask, Phillies jersey, Phillies long socks and Phanatic flip-flops for the occasion. Sure, watching his favorite team is what pulled him to the park. But in this kind of summer, it's the chance to reconnect with friends and fellow fans and feel like a part of the baseball community again that had him stake out a spot at every home game.

Alvarado was among 30-plus fans who went wild when Harper drove a 3-1 pitch way out to right-center into Atlanta's bullpen in the Phillies' 13-8 victory Monday night. The noise was heard on TV, the radio, in the dugouts -- and sparked an idea.