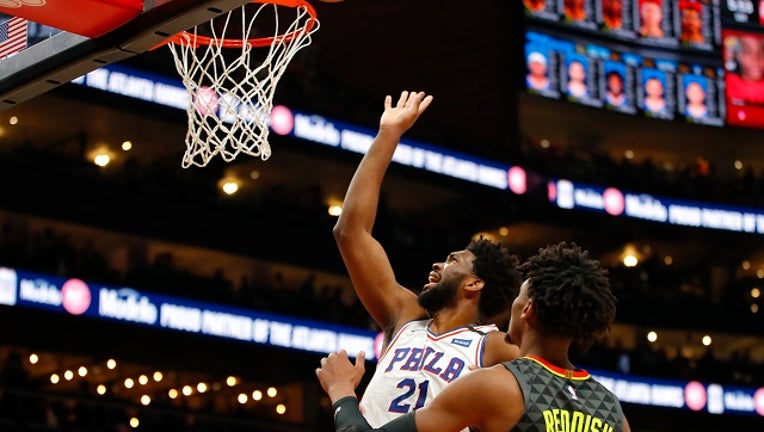 ATLANTA - All-Star Trae Young had 39 points and a career-high 18 assists to lead the Atlanta Hawks past Ben Simmons and Philadelphia 127-117 on Thursday night, extending the 76ers' road woes.

Simmons scored 31 points to lead Philadelphia. Shake Milton had a career-high 27 points — 14 more than his previous high — but it wasn't enough to improve the 76ers' poor road record. Philadelphia, 22-2 at home, fell to 9-16 in away games.

John Collins had 17 points and 20 rebounds for Atlanta.

The 76ers, who began the night tied with Indiana for fifth place in the Eastern Conference, held their last lead at 21-20 against the Hawks, who are last in the conference.

Philadelphia coach Brett Brown called a timeout early in the final period after Young's 3-pointer gave Atlanta a 106-104 lead. Apparently still unhappy with his team's defense, Brown called another timeout about one minute later after Young's floater pushed the lead to 14 points at 108-94, capping a 9-0 run.

Philadelphia cut Atlanta's lead to 121-116 before Vince Carter, who had 14 points, sank two free throws to increase the lead to seven points.

Milton scored three straight baskets for Philadelphia, including two 3-pointers, late in the first half to cut Atlanta's lead to 69-67.

Young closed the first half by making four free throws after he was fouled by Tobias Harris, pushing the lead to 74-67 at the break. Harris was called for a technical foul before Brown called a timeout to request a coach's challenge of the call that Young was shooting a 3-pointer when fouled.

Brown protested when it was announced the challenge was not possible because Young already had taken one free throw. Brown also was called for a technical foul.

Atlanta stretched the lead to 90-77 on Kevin Huerter's 3-pointer midway through the third quarter.

Hawks coach Lloyd Pierce and his assistants wore Kobe Bryant's Nike shoes during the game as their tribute to the retired Los Angeles Lakers great, who was killed Sunday in a helicopter crash.

76ers: Joel Embid had 21 points and 14 rebounds. Tobias Harris had 21 points and nine rebounds. ... Milton had 16 points in the first half, topping his previous career high — 13 — for a full game. ... Simmons (minor upper respiratory illness) was cleared following pregame warmups.

Hawks: Young needed only one period to log his fifth consecutive double-double. He had 14 points and 10 assists in the period. ... Bruno Fernando (left calf) and Alex Len (right hip) were out as Atlanta again dealt with a lack of depth on its front line. G DeAndre Bembry (right hand) missed his fifth straight game. F Jabari Parker (shoulder) will be evaluated on Tuesday. ... Carter appeared in his 1,523rd game, breaking a tie with Dirk Nowitzki for third all-time.

The 76ers continue their four-game trip on Saturday at Boston.

The Hawks, who are 5-20 on the road, play Saturday at Dallas.