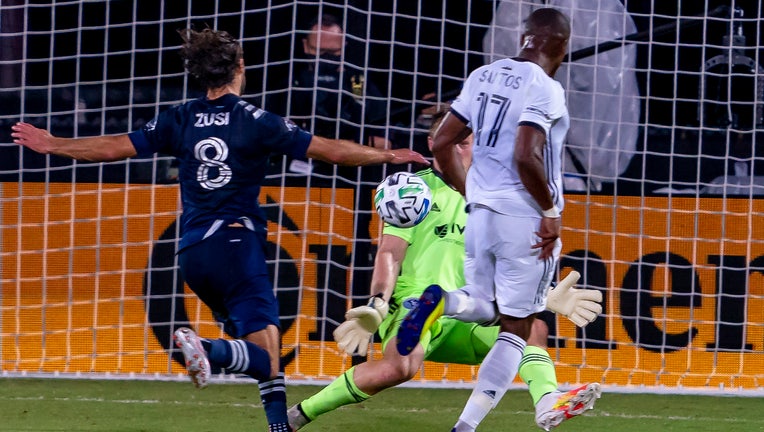 ORLANDO, FL - JULY 30: Philadelphia Union forward Sergio Santos (17) scores his 1st goal of the game during the MLS Is Back Tournament Quarterfinal between the Philadelphia Union v Sporting Kansas City on July 30, 2020 at the ESPN Wide World of Sport (Getty Images)

LAKE BUENA VISTA, Fla. - Jamiro Monteiro and Sergio Santos scored two minutes apart midway through the first half, Santos added a second goal just before halftime and the Philadelphia Union reached the semifinals of the MLS is Back tournament with a 3-1 victory over Sporting Kansas City on Thursday night.

Philadelphia’s perfect run in the tournament continued thanks to its first-half scoring blitz. The Union had two wins and a draw in the group stage then beat New England in the round of 16.

Philadelphia will face either New York City FC or Portland in the semifinals next Wednesday.

“It’s a really tight knit group right now,” Philadelphia coach Jim Curtin said. “Very confident, not afraid of anybody, respectful of every opponent, but we’ll go toe-to-toe with anybody. And we think we can come out on the top after 90 minutes.”'

Santos had the only goal in the victory over New England and was responsible for giving Philadelphia a 3-0 lead.

Moments after Monteiro finished a cross from Alejandro Bedoya for a 1-0 lead, Santos caught Kansas City being overly aggressive on a free kick in Philadelphia’s end. A bad pass by Kansas City’s Luis Martins sent Santos free in a footrace behind the defense and finished the long run by chipping goalkeeper Tim Melia for a 2-0 lead.

In the 39th minute, Santos made it 3-0 as promising 19-year-old midfielder Brenden Aaronson saw Santos unmarked and his diagonal pass perfectly set up the striker for the finish.

“Sergio's commitment to get in the box is always there. I think it’s just finding him," Aaronson said. “He made a great run back post and it was just up to me to find him. I think that’s my role on this team. I want to get assists for them and try and help them out as much as I can scoring goals.”

Kansas City pulled back a goal during first-half stoppage time when Alan Pulido’s header beat Philadelphia goalkeeper Andre Blake. But it was the only time Kansas City got one past the Union goalkeeper. Blake was solid making six saves. He got help from the post when Pulido’s free kick ricocheted away from the goal early in the second half. Pulido had another chance in the 57th minute from inside the 6-yard box that Blake saved and Johnny Russell’s goal off the rebound was disallowed as Russell was offside.

“As the whistle blew the other team wanted the game. And we as a team, we didn’t. We were not in the game,” Kansas City coach Peter Vermes said. “It took three goals to wake us up. And that’s the simple thoughts on the game. By the time we woke up, unfortunately things didn’t fall our way. And we deserve that based on the fact that they wanted them more than us.”