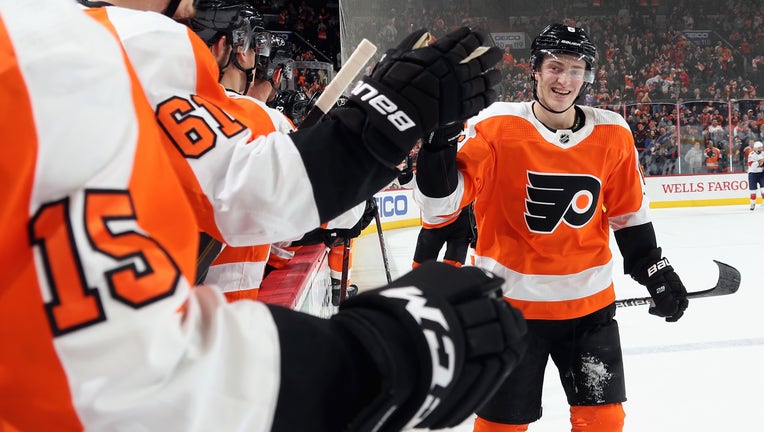 PHILADELPHIA - James van Riemsdyk had a goal and assist, Carter Hart stopped 30 shots in his return from injury and the Philadelphia Flyers beat the Florida Panthers 3-1 Monday night.

Travis Sanheim, Ivan Provorov and Claude Giroux also had goals for Philadelphia, which is 6-1-1 in the last eight. The Flyers improved to 19-5-4 at home.

MacKenzie Weegar scored for Florida, which has lost four straight.

Hart missed nine games with an abdominal strain but looked sharp in his first game since Jan. 13.

Panthers goalie Sergei Bobrovsky, who began his NHL career with the Flyers in 2010, had 30 saves.

Van Riemsdyk gave the Flyers a 2-1 lead in the second on his 16th goal. Jake Voracek hopped over the boards onto the ice following a shift change, picked up a loose pick and started a 2-on-none break. Voracek slid a pass to van Riemsdyk, who slipped it past Bobrovsky.

Sanheim flipped in a rebound off van Riemsdyk's shot for his eighth goal and a 3-1 lead in the final minute of the second period.

Giroux scored into an empty net with the Flyers short-handed late in the third.

Provorov blasted a shot just under the crossbar to tie it at 1 late in the first. He snapped a 17-game goal drought with his 10th this season.

Weegar ripped a one-timer from the left circle inside the far post for his first goal since Oct. 24, giving the Panthers a 1-0 lead early in the first period. Aaron Ekblad's slap shot from the opposite side kicked out to Weegar, who fired it home for his fourth goal. Weegar had missed 16 of the last 18 games.

NOTES: Hart wore a helmet featuring Ray Emery's face, a tribute to the former NHL goalie who died in 2018. ... Bobrovsky played in his 500th NHL game. ... Flyers defenseman Shayne Gostisbehere was scratched for the second straight game after returning last Thursday from a knee injury that caused him to miss 10 games. ... Flyers forward Joel Farabee sat out his third in a row. ... Panthers center Brian Boyle missed his fourth straight game with an upper-body injury.

Panthers: Visit the New Jersey Devils on Tuesday night before returning home to face the Flyers again on Thursday.

Flyers: Begin a three-game road trip at the New York Islanders on Tuesday.